MONTREAL – BRP Inc. announced an ambitious expansion into electric vehicles on Thursday, investing $300 million over five years as the company looks to adapt to market trends and broaden its appeal to a new set of customers.

The maker of Ski-Doos and Sea-Doos plans to offer electric versions of its recreational vehicles in each of its product lines by the end of 2026. In an interview with The Canadian Press, BRP chief executive Jose Boisjoli said the company hopes that the new line will provide a different experience for customers and help the company transition to a future in which electric vehicles will become more common.

“When you ride the electric vehicle prototype, the ride is different,” Boisjoli said. “We believe we will be able to create new riding experiences for some customers that are not interested in what we’re doing today, but could be interested in trying something new.”

The announcement came as BRP beat analysts’ estimates in its fourth-quarter earnings results on Thursday, reporting that fourth-quarter profit more than doubled compared with a year earlier. 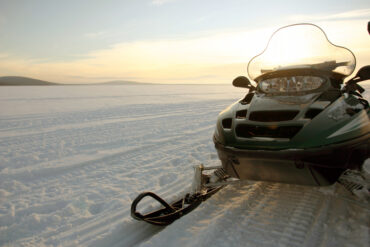 The strong interest in BRP’s products took the company by surprise early in the pandemic, when it suffered from inventory and supply chain issues that prevented it from meeting market demand. Looking ahead to next year, BRP plans to invest in adding production capacity, including at its facilities in Mexico.

The increase in sales has been driven in large part by new customers, especially younger people and women, Boisjoli said. BRP saw growth across all of its vehicle categories, including an approximately 90 per cent year-over-year increase in personal watercraft sales in the fourth quarter.

As part of the push into electric vehicles, BRP will expand its Rotax electric power unit development infrastructure in Austria and establish an electric vehicle development centre in its hometown of Valcourt, Que. The investment will create 160 jobs over the next 18 months, 110 of which will be based in Quebec, Boisjoli said.

BRP expects to introduce the first product to the market within the next two years, followed by a rapid rollout across all of its product lines. Boisjoli declined to specify which of its products would be the first to have an electric version rolled out, but said the vehicles will be priced at a premium over their combustion-engine counterparts.

BRP does not have an immediate plan for developing charging infrastructure for the new vehicles, which can be charged in any car charging station, Boisjoli said. However, it could be difficult to develop that infrastructure everywhere in the world, he added.

In its outlook for its 2022 financial year, BRP said it expects its full-year normalized earnings of $7.25 to $8 per diluted share, an increase of 35 to 48 per cent. Full-year revenue is expected to grow 25 to 30 per cent.

Analysts praised BRP’s strong guidance for 2022 and expected the news would offer a boost to the company’s stock.

Asked on a call with analysts Thursday morning whether sales would slow down once travel resumed after the pandemic and more people started travelling again, Boisjoli said he expected demand to stay high for the time being.

“It will take some time to taper down,” Boisjoli said. “That’s why we like the challenge to convert those new entrants to our industry.”