If fishing vessel operators conduct regular safety meetings, they can review on-board hazards and remind crew of safety precautions, the Transportation Safety Board of Canada suggested in an investigation report released Thursday. 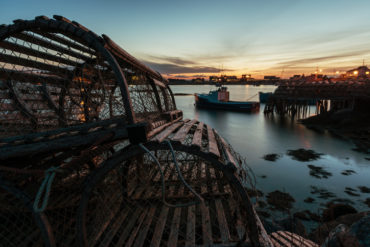 TSB – a separate organization from Transport Canada – released Jan. 19 its report into the investigation of a fatal accident on the Cock-a-Wit Lady, a lobster vessel that left Shag Harbour, Nova Scotia with five members on Nov. 30, 2015. A deck hand was pulled overboard after freeing a trap that became stuck on a port guard rail. The other crew members recovered the deck hand, who was taken to hospital but pronounced deceased.

“The crew member was standing in the trap’s coil of rope when it was freed,” TSB said in the report. “The coil became tight around his leg and he was hauled overboard.”

The accident occurred about 23 nautical miles south-southwest of Clark’s Harbour.

“Although it was commonly known and understood by the crew that stepping in the coils of rope was a significant safety risk and should not be done, this was not reinforced or addressed by regular safety meetings,” TSB said in the report. “Such meetings provide a review of on-board hazards and a reminder of safety precautions to take while setting gear – especially on the opening day of the season, which is one of the most dangerous days of the year for lobster fishermen due to the high volume of traps carried on board and the desire to set those traps quickly.”

After the deck hand of the Cock-a-Wit Lady went overboard, the other crew members attempted to pull him out of the water.

“Given the extreme angle at which the line was being hauled, as well as the strain caused by the weight of the submerged traps and the deckhand who was wearing the now inflated PFD, the line parted,” TSB stated in the report. “The master navigated the vessel to the other end of the line and picked up the balloon to which it was attached to retrieve it.”

The deck hand was pulled out of the water after about 10 minutes.

“The Watchlist says that new regulations must be implemented for commercial fishing vessels of all sizes, and user-friendly guidelines regarding vessel stability must be developed and implemented to reduce unsafe practices,” TSB said in its report into the Cock-a-Wit Lady tragedy.

One issue that is multimodal is the pace at which Transport Canada implements recommendations.

“TSB recommendations are non-binding, but the relevant minister is nonetheless required by law to respond to the TSB on what, if any, action will be taken to address the underlying safety deficiency,” TSB says on it watch list site. “There have been and continue to be repeated delays in publishing proposed amendments to the Fishing Vessel Regulations. Meanwhile, the average annual number of fatalities has remained constant despite a decline in the numbers of registered fishermen and active fishing vessels.”

In its investigation report on the Cock-a-Wit Lady accident, TSB noted that new Fishing Vessel Safety Regulations will come into force on 13 July 2017.

“Under these regulations, small fishing vessels will be required to have written safety procedures (in English or French, according to the needs of the crew) and to familiarize the persons on board the fishing vessel with those procedures,” TSB stated. “The procedures are required to include the location and use of all safety equipment as well as all of the measures that must be taken to protect persons on board, in particular, measures to prevent persons from falling overboard, to retrieve persons who have fallen overboard, to protect limbs from rotating equipment, and to avoid ropes, docking lines, nets, and other fishing equipment that may pose a safety hazard. The new Fishing Vessel Safety Regulations will also require that drills on safety procedures, including person overboard situations, be held to ensure that the crew is proficient at all times in carrying out those procedures. A record shall be kept of every drill.”

In 2004, TSB recommended that Transport Canada require small passenger vessel enterprises to have a safety management system. That was made in an investigation report into the sinking June 23, 2002 of the amphibious passenger vehicle Lady Duck in the Ottawa River. Four passengers drowned.

Regulations did not require the Lady Duck operator to have a safety management structure in place.

“Characteristics of the vehicle indicated a lack of awareness of marine standards of construction and maintenance, in that the vehicle was constructed with low freeboard, without watertight fittings at through-hull penetrations and with incorrectly installed bilge pumping arrangements,” TSB said in its investigation report into the Lady Duck tragedy.

In 2013, Transport Canada advised TSB that the “proposed Safety Management Regulations would not be applied to vessels less than 24 m in length and carrying fewer than 12 passengers.”

TSB currently considers Transport Canada’s response to its recommendation for safety management systems for small passenger vessel enterprises, to be unsatisfactory. The regulator “needs to take steps to ensure owners/operators have processes in place to address the risks specific to an operation” TSB states on its website. “Until such time as these are in place, the risks associated with an operation may not be identified nor addressed.”