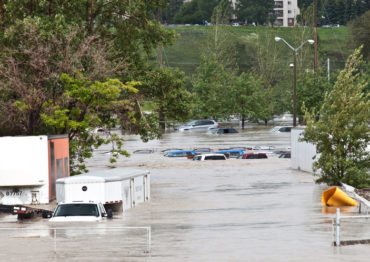 In 2015, Aviva Canada, The Co-operators and RSA Canada were among the first insurers to announce they would cover overland flood. Until then, only sewer backup was generally available. The 2013 southern Alberta floods led to economic losses of about $6 billion, but only about $1.7 billion of that was covered by insurance (mostly sewer backup).

Water damage coverage is still a concern because overland flood is not available at affordable rates to hundreds of thousands of Canadian homeowners, mainly because they live in areas deemed by insurers to be at a high risk of flooding, Stewart told Canadian Underwriter.

IBC is not naming all 16 carriers offering overland flood. Those who publicly advertise it include Aviva, The Co-operators, RSA, Gore Mutual, Wawanesa, Economical, Desjardins (whose brands in Canada include State Farm and The Personal), Intact, and Coachman.

Flood coverage was among the topics of conversation during a meeting of politicians on May 25. That meeting was co-chaired by federal public safety minister Ralph Goodale and Alberta municipal affairs minister Shaye Anderson.

Ministers attending that meeting asked IBC to “continue to further refine options for managing the financial costs of high-risk properties,” including drawing from international practices such as Flood Re in Britain, a Public Safety Canada spokesperson wrote Tuesday in an e-mail to Canadian Underwriter.

IBC recommended earlier that Canada have insurance for homes at high risk of flood where the coverage is administered by insurers but the capital is provided by government.

“It remains to be determined what the mechanism would look like,” Stewart said.  “We don’t believe that low-risk insurance policyholders should be subsidizing those who have been permitted to continue living in harm’s way.”

Contacted by Canadian Underwriter, Public Safety Canada would not confirm whether the federal government agrees that it should provide capital for flood risk for high-risk properties.

Flood Re, a reinsurer subsidized by a tax imposed on all carriers writing home insurance in Britain, was launched two years ago.