Canada’s Minister of Transport, Marc Garneau, has issued a protective direction aimed at accelerating the phasing out of DOT-111 tank cars for crude oil service to Nov. 1. 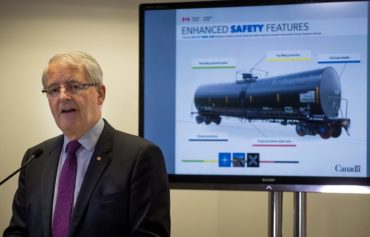 Federal Transport Minister Marc Garneau makes an announcement in Montreal on Monday, July 25, 2016. Garneau confirmed older DOT-111 rail tanker cars will not be able to transport crude oil or other dangerous goods as of Nov. 1. The cars are the same model that was involved in the deadly Lac-Megantic tragedy in which 47 people died three years ago. The ban kicks in on Nov. 1, six months earlier than planned for “non-jacketed” cars – those without a layer of thermal protection – and 16 months earlier than cars with jackets. THE CANADIAN PRESS/Peter McCabe

DOT-111 tank cars were involved in the July 2013 train derailment in Lac-Mégantic, Que., which claimed the lives of 47 people and destroyed part of the town.

Legacy DOT-111 tank cars are considered to be the least crash resistant tank cars still being used in crude oil service, TC said in a statement. They will be replaced by tank cars such as the TC-117, which is designed with a number of additional safety features, including thicker steel, head shields, thermal protection and top fitting protection.

“Accelerating the phase out of legacy DOT-111 tank cars in crude oil services is another crucial step in improving the safety of communities along our railway lines,” Garneau said in the statement. “By removing the least crash resistant tank cars in service, we continue to modernize how dangerous goods are shipped in Canada and further protect Canadians and their families who live near Canada’s rail network.” 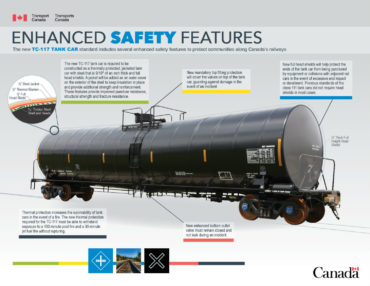 The new class of tank car was initially introduced in May 2015 by then-Minister of Transport Lisa Raitt and U.S. Secretary of Transportation Anthony Foxx.

The Railway Association of Canada (RAC) has indicated that it “strongly supports” the accelerated phase-out of the legacy DOT-111 tank cars. “Removing this tank car model from service sooner is an effective step towards ensuring the safe transportation of dangerous goods in Canada,” said RAC president and CEO Michael Bourque in a press release issued Monday. “We welcomed harmonized Canada-U.S. tank car standards introduced last year, and we’re equally pleased with today’s announcement.”