The Canadian Coast Guard (CCG) has reported that six crew members have been safety rescued after a tanker ran aground off Nova Scotia on Sunday. 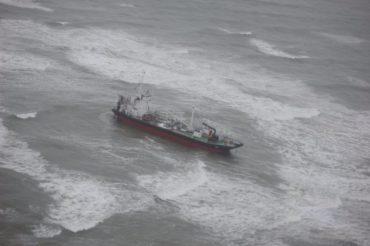 In a series of tweets, CCG reported that the vessel Arca 1 ran aground off Sydney Mines, N.S. The Joint Rescue Co-ordination Centre Halifax tasked a Cormorant helicopter and CCG ships to assist the vessel in distress near Sydney Harbour.

According to the CCG tweets, the vessel experienced engine failure and ran aground at about 10 a.m. Once rescuers were on scene, all crew were hoisted by the Cormorant and transported safely to Sydney, N.S.

The CCG remains on the scene “maintaining overnight monitoring.” The Transportation Safety Board of Canada said in a statement on Monday that it is deploying a team of investigators to Sydney to gather information and assess the occurrence.

The Canadian Press said on Sunday that Anne Miller, a regional director with CCG’s Atlantic region, was en route to Mexico with no cargo on board when it experienced mechanical difficulties. Miller told the Canadian Press that the small tanker was carrying 15 tonnes of bunker fuel for its own engines and headed to Sydney when it ran aground.

Miller added that there have been no reports of pollution and the ship’s hull has not been seriously damaged.