Why Canadian insurers paid $1.33 billion for cat claims in a benign cat year 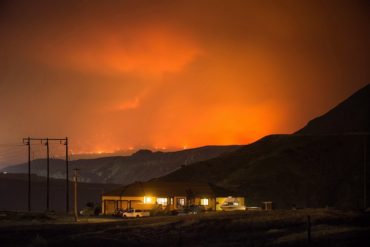 A wildfire burns on a mountain in the distance east of Cache Creek behind a house in Boston Flats, B.C., in the early morning hours of Monday July 10, 2017. THE CANADIAN PRESS/Darryl Dyck

“I would likely expect that to continue to be the trend with those peak event years. We know Fort McMurray brought the Canadian annual loss to the highest it’s ever been, and the 2013 flooding events in Toronto and Calgary stick out as well.”

So, in the absence of a major cat event like that in 2017, how did the industry end up paying out more than $1 billion in catastrophe claims last year?

“There are so many factors to relate to it,” said Twidle. “There are people having more coverage, more events occurring over populated centres. This summer, the cat season, we had a lot of hail events and thunderstorms throughout the Prairie provinces…It’s not that hard to hit the $25-million [cat] threshold when golf ball sized hail goes over a town like Red Deer [Alta.].”

Wildfires in B.C. in 2017 cost insurers $127 million, IBC reported, and weather was particularly stormy in the Atlantic provinces.

Now that insurers are covering overland flood, and with the increase in flooding events, insurers are exposed to more claims costs as the new coverage is triggered.

“This year, we had a lot of flooding, and the companies have started to roll out more flood coverage,” Twidle said. “I could certainly see that flooding events may become more of an issue for companies just because of that. You will always have those flash flooding events. They can track over pretty much anywhere, and that can cause sewer pumps to back up and basement seepage as well.”

Flood risk management will be one of several topics discussed at the Canadian Catastrophe Conference held this year in Ottawa January 31 to February 2.