The National Energy Board (NEB), an independent federal regulator of several parts of Canada’s energy industry, announced on Wednesday that it will require companies to provide additional emergency response detail during the pipeline application phase of a project. 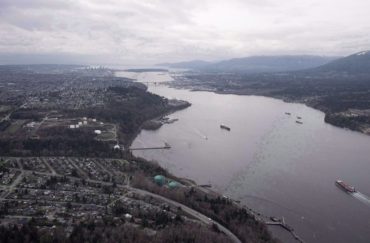 Kinder Morgan Trans Mountain Expansion Project’s Westeridge loading dock, at bottom with green tanks, is seen in Burnaby, B.C., on Friday, Nov. 25, 2016. British Columbia has granted environmental approval to the expansion of the Trans Mountain pipeline.The decision checks off another of the five conditions that Premier Christy Clark placed on the pipeline’s approval.THE CANADIAN PRESS/Jonathan Hayward

NEB said in a statement that it will amend the NEB Filing Manual after considering public input received during a 60-day online public comment period launched on Wednesday. The Filing Manual provides direction to companies on the extent of information required during the application process.

When implemented into the NEB Filing Manual, company applications could be deemed incomplete if the additional emergency response information is not included, or companies could be required to submit additional information before a hearing begins, NEB explained. “This is a significant change that addresses increased requests for company emergency response information, from the Board and other hearing participants, during recent application and hearing processes,” the statement said.

In particular, the proposed changes will require:

“Canadians have told us that they want more information about a company’s emergency response information at the earliest stages of a proposed project,” NEB chair and chief executive officer Peter Watson said in the statement. “These changes will foster increased understanding among stakeholders, hearing participants, NEB experts, and panel members regarding a company’s plans to respond should an emergency occur.”

The announcement of the proposed changes came at the same time as Kinder Morgan’s Trans Mountain Pipeline Project received its environmental certificate from British Columbia’s Environmental Assessment Office and met the province’s five conditions for “coastal protection and economic benefits.”

“The five conditions is an articulation of the way we do business in British Columbia,” Premier Christy Clark said in a press release from the Office of the Premier. “We set the bar high to stand up for B.C. to protect our coast and environment, ensure opportunities for First Nations participation and secure a fair share of economic benefits for all British Columbians.”

“Trans Mountain shares the values and priorities of safety, environmental protection and prosperity for communities that B.C.’s 5 Conditions represent,” said Ian Anderson, president of Kinder Morgan Canada, in a statement on Wednesday. “The province has been clear from the very beginning and today’s announcement is the culmination of many years of work to demonstrate to British Columbians that our project meets both the regulatory requirements and the B.C. government’s conditions to move forward. We believe this represents a positive outcome for our company, customers and for British Columbians and all Canadians who will benefit from the construction and operation of an expanded pipeline.”

In a negotiated commitment, Trans Mountain has agreed to contribute a minimum of $25 million to a maximum of $50 million each year depending on shipments in excess of contracted volumes, over the 20-year life of the project. Proceeds will be dedicated to a newly formed B.C. Clean Communities Program to be accessed by communities for local projects that protect, sustain and restore B.C.’s natural and coastal environments.

Kinder Morgan said that next steps will include a final investment decision by the company’s board of directors. Trans Mountain is planning to begin construction in September, with an in-service date for the twinned pipeline system expected in late 2019.