Canadians evacuated from homes after a wildfire can expect to suffer $11,300 in financial losses: Square One Insurance

Canadians evacuated from their homes because of wildfires can expect to suffer an average of $11,300 in financial losses, a recent study from Square One Insurance Services Inc. has found. 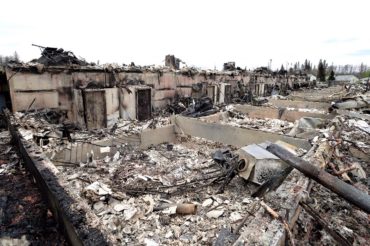 FILE – Burned out houses are shown in the Abasands neighbourhood during a media tour of the fire-damaged city of Fort McMurray, Alta., in a May 9, 2016, file photo. Severe weather events such as fires and floods are becoming more frequent and more difficult to predict, and it’s forcing architects and engineers to rethink how they design buildings, infrastructure and cities. THE CANADIAN PRESS/Jonathan Hayward, File

Those with home insurance can recover most, but not all, of the financial loss, Square One said in a press release on Thursday.

There have already been 1,700 wildfires across Canada during the first six months of 2017, the company reported. The province with the most wildfires is Alberta, accounting for 37% of the national total, followed by British Columbia with 16% and Quebec with 8%.

“There’s a lot of information available on wildfire prevention and preparedness,” said Square One president Daniel Mirkovic in the release. “But, there’s surprisingly very little information on what financial losses people suffer from wildfires. That’s why we’ve decided to share our findings from the Fort McMurray wildfire in 2016.”

The internal study was completed on June 30.

In reviewing the Fort McMurray wildfire, Square One found the following:

“And, it’s important to note that claims processing times during natural disasters can vary,” the release added. “That means you will likely still be in the claims process even after the mandatory evacuation order has been lifted and you’re allowed to return home.”

Square One pointed to the FireSmart program for steps in helping to prepare the home and its surrounding area against wildfire damage. The first step is to create a protection zone around the home, the release said. If possible, ensure the area within 10 metres of the home is free of trees, flammable vegetation and other combustibles including woodpiles or garbage. Removing tree branches that are up to two metres from the ground will help stop wildfires from reaching the tree tops, the release added. If possible, try to keep the tops of the trees on the property at least three meters away from each other. If the fire reaches the top of the trees, the distance between them may stop the fire from spreading. FireSmart also “highly recommends” keeping grass mowed short and well-watered, Square One noted.

Another step is to use fireproof materials in the construction of the home. This could include fire-resistant roofing and siding materials, tempered glass windows and a spark arrestor on the chimney. Taking these steps may even reduce your home insurance rate, Square One said.

With wildfires occurring more often, the insurance company also explained what should be done during the alert period and the actual evacuation:

Established in 2011, Square One offers the “only home insurance policy in North America that can be personalized to your unique needs,” the release said. Square One is also one of the few providers to automatically include sewer backup and broad water protection in its policies. The company currently serves British Columbia, Alberta, Saskatchewan, Manitoba, Ontario and Arizona.