BELLA BELLA, B.C. – The chief of a village near British Columbia’s Great Bear Rainforest says members of the First Nations community fought a wildfire on their own this weekend after they were unable to get help from provincial government agencies. 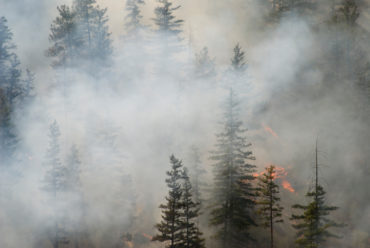 Heiltsuk Chief Marilyn Slett says the fire broke out late Friday on a hillside across from Bella Bella in an area where several power lines are located.

She says the First Nation was still waiting for a response after spending the weekend trying to contact BC Wildfire, Provincial Emergency Preparedness and Boralex, which operates the power lines.

In an emailed statement, Boralex spokeswoman Lauriane Dery says the flames had been contained by Sunday night and the company hopes to restore power Monday.

Dery says the cause of the fire was unknown, but it followed an electrical failure on the transmission line during a wind storm Friday night.

The BC Wildfire Service said in a news release Monday that a response officer would be sent to the scene.

The Wildfire Service also said the blaze was sparked by power lines brought down during the wind storm.

Slett says power to their community was being supplied by a diesel generator, while residents of nearby Denny Island were on standby to evacuate.

She says storm-force winds of up to 90 kilometres an hour made fighting the fire difficult.

Heiltsuk emergency officials say flames from the fire were low, but burning vigorously near the ground, while the release from the Wildfire Service says no trees have been charred.

Slett says the fire was in an area that is culturally significant and heavily used by the community.

She compared the lack of response to the fire with the sinking of a commercial tug boat that spilled more than 100,000 litres of diesel fuel late last year.

“Just like with the sinking of the Nathan E. Stewart, (we) found ourselves in the frustrating position of not having the proper equipment, resources, and training to respond fully to the situation,” she said in a statement.