Consolidated and P&C net premiums written (NPW) were US$7.6 billion and US$7.1 billion, respectively, both down 0.8% from Q2 2016, Chubb said in a statement. Operating income was US$1.2 billion compared with US$1.06 billion for the same quarter last year.

Evan G. Greenberg, chair and chief executive officer of Chubb, said in the statement that the strong earnings in the most recent quarter were driven by excellent underwriting results and record investment income. “Our 88% P&C combined ratio, more than two points better than prior year, was truly distinguishing given soft market conditions that have continued for a number of years now,” he said. “We benefited from a substantial improvement in both our expense ratio and our loss ratio as a result of merger-related efficiencies and underwriting actions as well as lower catastrophe losses. Total P&C underwriting income was up 20%.” 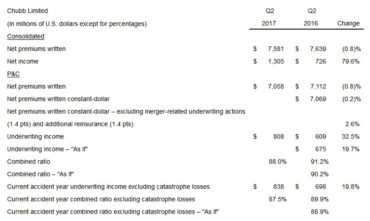 North America Agricultural Insurance NPW increased 7.7% to US$403 million from US$375 million in Q2 2016, the statement said, adding that the combined ratio was 93.3% compared with 95.9% in the second quarter of last year.

Life Insurance segment income was US$52 million, compared with $74 million in Q2 2016, “primarily reflecting the adverse impact of updating the long-term benefit ratio in the variable annuity business in the fourth quarter of 2016,” Chubb said in the statement.

Integration-related realized and annualized run-rate savings related to the ACE/Chubb merger are also ahead of expectations, Chubb reported. The company now expects to achieve annualized run-rate savings of US$875 million by the end of 2018, up from the prior estimate of US$800 million. Integration and merger-related expenses are now estimated to be US$903 million, up from US$809 million.