The Supreme Court of Canada has dismissed an application from the City of Hamilton for leave to appeal a finding that a nine-year-old boy was not contributorily negligent after he was hit by a car at a location where a crossing guard is normally posted. 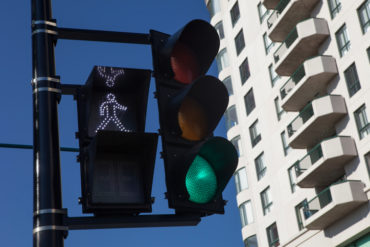 Court records indicate that on May 14, 2002, shortly before his 10th birthday, Dean Saumur was crossing Gray Road near Collegiate Ave. in Stoney Creek, Ont.  He was hit be a car driven by Luba Antoniak and owned by Lester Antoniak.

The Antoniaks settled. In 2015, a trial was held to determine the liability of the Antoniaks and the City of Hamilton.

A crosswalk on Gray Road was “scheduled to be manned by a crossing guard from 8:20 to 8:40 a.m.,” on the day that Saumur was hit, Justice Ramsay wrote in a ruling released in 2015. “The crossing guard was not present when Dean attempted to cross the street.”

A patient transfer medic who happened to be at the accident scence testified that the boy was hit at 8:38 a.m. although the call to 911 was not recorded until 8:42. A 13-year-old girl who lived next to the crosswalk had called 911 at her home shortly after the accident.

The plaintiff and defendant disagreed as to whether the 911 call was made before or after 8:40 a.m.

Justice Ramsay found that Saumur was not contributorily negligent and did not act “below the standard of a reasonably prudent 10-year-old of like intelligence and experience.”

On appeal, the City of Hamilton took issue with both Justice Ramsay’s finding on the time of the accident and the finding that Dean was not contributorily negligent.

The parties agreed that Dean was “old enough for a finding of contributory negligence to be made against him.”

Among other things, the city argued that Saumur did not remember to look left before he crossed.

Justice Ramsay cited several decisions, including the Court of Appeal for Ontario ruling, released in 1998, in Nespolon v. Alford.

In 1988, Gary Nespolon was driving near Amherstburg when he struck and killed Kevin Snider, 14 at the time. Snider had been drinking and was dropped off by two acquaintances, Justin Alford and Kyle Berard. Nespolon was diagnosed with post traumatic stress disorder in 1995. He sued Alford and Berard, plus Snider’s estate.

A judge found that Snider owed a duty of care to those “who might likely become involved as a result of his . . . drinking . . . wine to the extent that he became inebriated.” However, in its divided ruling released in 1998, two of the three Court of Appeal for Ontario judges hearing the appeal ruled it was “not reasonable to conclude” that a 14-year-old boy “could foresee that by getting drunk at his friend’s house earlier in the evening, he could end up falling on a road” and causing a driver who hit him to develop PTSD.

“Where the age is not such as to make a discussion of contributory negligence absurd, it is a question for the jury in each case whether the infant exercised the care to be expected from a child of like age, intelligence and experience,” wrote Patrick Kerwin, then Chief Justice of Canada, in 1956 in McEllistrum.

Douglas Craig McEllistrum, died March 8, 1953 at the age of six, five days after being hit by a car driven by Archie Etches near Chatham.

Court records indicate that the six-year-old boy had moved to the travelled portion of the highway while walking. McEllistrum’s father sued Etches under the The Fatal Accidents Act and the Trustee Act.