The peat bogs of the world, once waterlogged repositories of dead moss, are being converted into fuel-packed fire hazards that can burn for months and generate deadly smoke, warns a researcher from McMaster University in Hamilton, Ont. 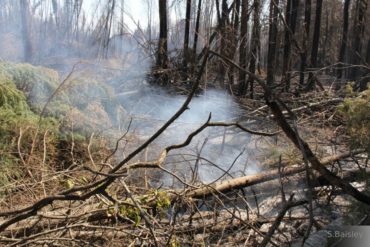 New research from McMaster’s School of Geography and Earth Sciences, led by Gustaf Granath (now of the Swedish University of Agricultural Sciences in Uppsala) and James Michael Waddington, was published on Monday in the journal Scientific Reports. The research article, titled Mitigating wildfire carbon loss in managed northern peatlands through restoration, showed that “peat mining for horticulture and fuel, drainage for agriculture and construction and overall global warming have made a growing number of the world’s bogs dry and vulnerable to fire that can burrow deep into the ground and burn for months, even through the winter, only to re-emerge.”

The study authors, who also include Paul Moore and Maxwell Lukenbach from McMaster, note that since glaciers receded about 12,000 years ago, the “humble bog” has acted as a storage vault for atmospheric carbon, packed with dead moss and topped by a green layer of living moss that can come back after a burn.

The world’s bogs hold more carbon than the word’s rainforests, and Canada is home to about 185 billion tonnes of increasingly vulnerable peat deposits, ranging from 40 centimetres to several metres deep, the university said in a press release. Dried peatlands fuelled the 2011 fire in Slave Lake, Alberta, for example, and the recent fire that devastated Fort McMurray also burned through a dried peatland along the only highway in and out of the town, the release noted.

“People don’t think about a fire going down into the soil,” Waddington said. “They think about it going across the landscape.”

The study’s abstract said that the results of the study “demonstrate that drained and mined peatlands in Canada and northern Europe can experience catastrophic deep burns (>200 t C ha−1 emitted) under current weather conditions. Furthermore, climate change will cause greater water losses in these peatlands and subject even deeper peat layers to wildfire combustion.”

However, the authors wrote, the rewetting of drained peatlands and the restoration of mined peatlands can effectively lower the risk of these deep burns, especially if a new peat moss layer successfully establishes and raises peat moisture content. “Restoration efforts are a necessary measure to mitigate the risk of carbon loss in managed peatlands under climate change,” the abstract said.

From a global perspective, peat mining in Europe and drainage to plant palm-oil plantations in southeast Asia are the sources of the greatest vulnerability, and have already helped to propagate fires that have caused massive destruction and death. In Moscow, smoke from the peat fires of 2010 killed an estimated 3,000 people. Peat fires in Southeast Asia last year released more than one billion tonnes of carbon dioxide.

The largely untouched bogs that honeycomb the vast boreal forests of Canada are also changing in worrisome ways, said Waddington, a professor in McMaster’s School of Geography and Earth Sciences. In northern forests, black spruce trees have proliferated on peat bogs, paradoxically, because fire suppression has left them to grow largely unchecked. Spruce trees block sunlight, killing the living layer of moss and sucking the moisture out of bogs, not only turning the peat material itself into a fire hazard, but also accelerating wildfires, the release explained. “You end up with a landscape with a lot more fuel than you would have had,” said Waddington.

The research also showed that previous damage can be reversed by thinning spruce trees in wilderness bogs and channeling water back into managed bogs, and planting new moss on top of the old moss (or even what remains of it). The cost can be high, but the cost in deaths, carbon emissions, property damage and fire suppression is ultimately higher, Waddington argued.