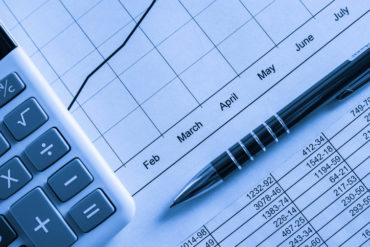 “Led by very good performance in our Specialty and International segments, fourth quarter net operating income of US$221 million was a solid result despite reserve strengthening in the run-off Defense Base Act business within Commercial,” said Dino E. Robusto, chairman and chief executive officer of CNA Financial Corporation.

P&C Operations’ net operating income was US$217 million for the fourth quarter of 2016 compared to US$202 million in the prior-year quarter. The increase was driven by higher net investment income, CNA reported. Catastrophe losses of US$18 million for the fourth quarter were primarily from weather-related events in the United States, compared to US$27 million after tax in the prior-year quarter.

The Specialty segment reported a net operating income increase of US$55 million for Q4 2016 to US$164 million, driven by higher favourable net prior-year reserve development. The combined ratio improved 9.4 points to 85.6% for Q4 2016 and 3.7 points for the full year to 85%. NWPs decreased $32 million as compared with the prior-year quarter due to a lower level of new business and slightly lower retention due to underwriting actions undertaken in certain business lines, CNA reported in the statement. 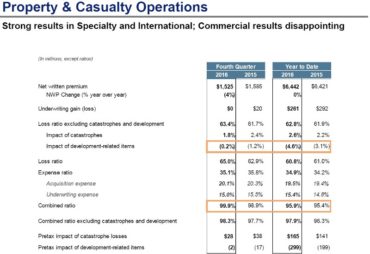 In the Commercial segment, net operating income decreased US$65 million for Q4 2016 compared to the prior-year quarter, primarily due to the “unfavourable period over period effect of net prior-year reserve development, partially offset by an increase in net investment income.” The combined ratio for the quarter increased 18.4 points to 118%. “The unfavourable net prior year development reflects a US$90 million increase in reserves related to the Defense Base Act workers’ compensation program that the company began to run-off in 2012,” the statement pointed out. Commercial NWPs decreased US$31 million compared to the prior-year quarter due to a decrease in new business as well as premium adjustments in CNA’s small business unit.