In the dog-eat-dog world of trying to generate sales during a global pandemic, brokerage principals are increasingly turning to performance-based compensation to help improve the performance of their brokers, according to Canadian Underwriter’s 2020 National Broker Survey.

Of the more than 80 brokerage principals surveyed by Canadian Underwriter during this summer, 71% reported performance-based compensation had been either “beneficial” or “highly beneficial” over the past two years in improving the performance of their brokers. 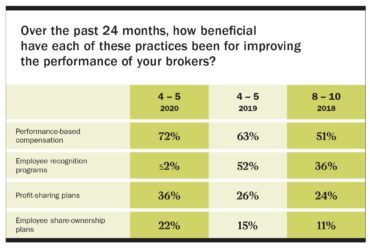 On one end of the continuum, a 100% commission-based structure ties a broker’s income directly to sales output: No sales, no pay. Some in the business refer to this model as, “You eat what you kill.”

Surex Direct, an award-winning brokerage based in Alberta, touted the success of this compensation model in a 2018 interview with Canadian Underwriter.

“The customer service level is much higher because you’re 100% invested in keeping that client and you’ll do what you can,” Ryan Kirk, vice president of operations for eastern Canada, explained at the time. “You need to go above and beyond to show [clients] why — even if there is a better price out there — my service is better than anything else, because you’re getting value for what you’re paying for.”

On the opposite end of the spectrum is a fully-salaried compensation model, in which the producer is paid an annual salary with no commission on sales. This model offers job security, in the sense that a broker’s income is guaranteed regardless of whether the brokerage’s sales are up or down.

But one downside is that there is no incentive to bring in new business since the broker isn’t making any additional income from improved sales. Also, as Kirk points out, the model doesn’t create any incentives for producers to up their game in customer service, since they get paid the same regardless of whether clients are won or lost.

Of course, there are a million shades of grey in between these two types of compensation structures.

Several comments in the 2020 National Broker Survey suggest that brokers have been finding success in experimenting with hybrid compensation models — ones that include a base salary component, but that introduce commission-based incentives.

For example, one broker principal in the survey refers to commission-based models that are tied to brokerage profits, rather than premium volume. “Having compensation tied to profitable growth has worked very well,” the broker reported. Another cited the success of “sharing CPC [contingent profit commission] with producers.”

Some referred to a key challenge when trying to introduce a new, performance-based compensation system into a brokerage that has a history of a salaried structure. “Personal lines staff are salary-based and I added a commission-based incentive that was effective, but complicated,” the broker wrote. “I am revising it to be simpler and I think that will improve its effectiveness even more.”

For some broker principals, the size of the commission matters. For example, one broker claimed success by “offering the best commission program in the industry — 50% on all business every year—allowing employees to grow their income and client base to become more successful.”

Back to National Broker Survey