SANAA, Yemen – A suicide car bomber struck a military and security compound adjacent to the international airport in southern Yemeni port city of Aden on Wednesday, killing at least 10 people and setting off clashes with soldiers, medical and security officials said.

No group immediately claimed responsibility for the attack, which came as Muslims worldwide celebrated the Eid al-Fitr holiday marking the end of the holy month of Ramadan. This year, the holy month has been particularly bloody, with attacks that killed 350 people and spread terror across continents.

Yemen, which is the grips of a civil war and has long battled a potent al-Qaida branch known as Al-Qaida in the Arabian Peninsula, has also seen an Islamic State affiliate emerge to stage large-scale attacks, particularly in the country’s south. 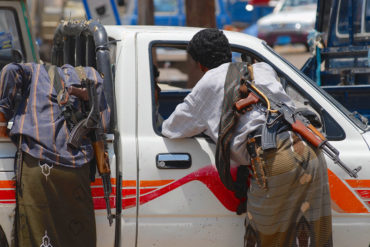 In Wednesday’s attack, the officials said that after the car bomb hit the Central Security headquarters, next to the Aden International Airport, militants stormed the compound and were clashing with soldiers. Explosions were heard and ambulance sirens wailed in the distance.

The death toll was expected to rise further, the officials said, speaking on condition of anonymity because they were not authorized to speak to the media.

Yemen’s civil war pits the country’s Shiite rebels known as Houthis and their allies against the internationally recognized government, backed by the Saudi-led coalition of mainly Arab states.

Kuwait has hosted peace talks between the warring sides, which have now been suspended till mid-July, to try and resolve the conflict. Two months of negotiations have failed to reach a breakthrough.

Yemen’s internationally recognized government has demanded the implementation of a U.N. Security Council resolution calling on the Houthis to withdraw from all towns and cities, including the capital, Sanaa, which they have overrun and surrender their heavy weapons. The Houthis want to form a unity government prior to any changes on the ground, according to the negotiators.

Though a truce went into effect a week before the talks began, the two sides have repeatedly accused each other of breaking it.

The conflict in Yemen has killed an estimated 9,000 people and pushed the Arab world’s poorest country to the brink of famine.