HALIFAX – Though international shipping lanes and Canada’s major ports remain open for business, the COVID-19 pandemic is making life miserable for many seafarers.

Under the latest rules, Canadian crews aboard most Canadian-flagged cargo vessels have agreed not to leave their ships when they arrive at their destinations, which means they can be restricted to their vessels for up to three months at a time.

The crews on some foreign-flagged ships, meanwhile, are being told they’ll be stuck on their ships – without shore leave – for up to nine months.

“It’s a real stressful situation,” Jim Given, president of the Seafarers’ International Union of Canada, said in an interview Wednesday.

“That outside contact is being lost for those seafarers. As a maritime community, we’re going to have to figure out how we handle this. Everybody is trying their best, but it’s very difficult.” 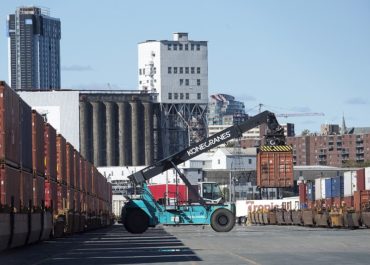 Shipping containers are moved at the Halterm Container Terminal in Halifax on Friday, Oct. 19, 2018. The Public Health Agency of Canada says a cargo ship travelling from Germany has been denied entry to the port of Halifax because several crew members have symptoms of COVID-19. THE CANADIAN PRESS/Andrew Vaughan

Helen Glenn, manager of the Mission of Seafarers, said her non-profit group is doing its best to help, even though the mission’s building on the Halifax waterfront has been temporarily closed.

Glenn said she has been making arrangements through shipping agents to contact each ship’s captain via cellphone or email to determine what crew members need before their ship arrives at the Port of Halifax.

At the top of every shopping list is a request for cellphone SIM cards, which give users access to long-distance calling and the internet.

“They would be unable to connect with their families without getting a data card or SIM card,” Glenn said, adding that she and her volunteers no longer board the vessels. Instead, there’s a brief exchange at the bottom of the gangway.

“It gives them the ability to make calls, send email, Skype and use FaceTime. Without these, they literally cannot reach their families.”

Glenn said communication tools like Wi-Fi and satellite phones are often unavailable aboard cargo ships, which contributes to a sense of isolation.

“Mental health during this tumultuous time is of the utmost importance, and these guys can’t even get off the vessel,” she said. “Shore leave is critical to their mental health. This situation is very sad.”

However, Glenn said everyone in the shipping industry understands how important it is to keep commercial ships virus-free.

Given, whose union represents about 90 per cent of the Canadian-flagged fleet of cargo vessels, said federal and provincial rules regarding shore leave has been changing in recent weeks.

“Right now, it’s a bit all over the map, and we’re trying to get it pinned down,” said Given, whose organization speaks for about 6,000 non-officers working aboard bulk carriers, oil tankers, passenger ferries and other commercial cargo ships.

Given said Canada’s shipping companies and their unions have agreed that crew members should not have shore leave to ensure they do not get infected with COVID-19.

“We think that’s the best way to keep our members safe and the economy rolling,” he said in an interview from his home in St. Catharines, Ont.

“Not all of our members are happy about being restricted on board the ship. Some of them still want to get off. Our job is to make sure they are safe.”

However, Given agreed that mental health becomes a key concern when there are long stretches without shore leave.

“We’ve given out numbers and our companies have employee-assistance programs set up so the members can call if they are feeling stressed or fatigued,” he said, adding that talks are
underway to determine if crews can work longer than three months at a time.

Some foreign shipping companies have already extended their crews’ contracts by a month, and there are ongoing negotiations aimed at extending some contracts to a year.

“When you get to that length on board, it gets dangerous,” Given says. “Fatigue sets in. There are stress factor that are enormous.”

This report by The Canadian Press was first published April 8, 2020.