Toronto-headquartered credit rating firm DBRS Limited has estimated that the total claim costs for the Fort McMurray wildfire will likely be in the range of $2 billion to $6 billion. 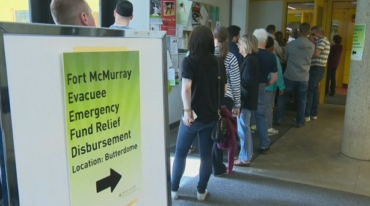 Insurance claims from Fort McMurray wildfire will be between $2 billion and $6 billion, DBRS estimates

DBRS said in a briefing on Friday that it is still premature to obtain accurate claim estimates as access to Fort McMurray is restricted. However, “using census data for Fort McMurray, claim estimates and using the Slave Lake fire as a benchmark, suggest that the claims costs for approximately 2,400+ damaged buildings and associated relocation costs for 80,000 evacuees to be away from their homes for several weeks will likely be in the range of $2 billion to $6 billion,” the briefing said, adding that “this range of claim costs is 20% to 60% of total annual 2015 property claims of $9.7 billion in Canada.”

As of Friday, at least 2,400 structures, mainly homes, have been destroyed or damaged, the credit rating firm said. The wildfire has also damaged business premises, hotels, supply and services businesses and a school under construction. According to DBRS, the initial estimate of 2,400+ structures suggests that approximately 10% of buildings in Fort McMurray have been affected. “Overall, if the wildfires do not persist, it appears 85% of the area will have been spared, with damage localized to 10% to 15% of the community.” 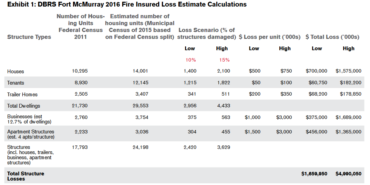 DBRS noted in the commentary brief, titled Major Canadian Insurers Well Prepared for Fort McMurray-Sized Catastrophe, that “this is a historically large number for the Canadian insurance industry in terms of catastrophic claim events and is shaping up to be the most expensive catastrophic natural disaster event in Canada.”

Still, DBRS expects no credit impact for major Canadian insurers as a result of the event due to the general practice by direct insurance writers of establishing reinsurance programs for such events. Direct writers are expected to incur losses that range from a few tens of millions of dollars up to a few hundreds of millions of dollars, depending on their reinsurance program structures, the commentary said.

“From a financial claims perspective, DBRS does not expect these direct writers to experience a severe hit to their balance sheets,” the briefing said. “Therefore, the bulk of the insured losses from the fire will be borne by the reinsurers. When compared to global catastrophic event activity, the project Fort McMurray claims will be notable, but not at the high end when compared to larger events that have occurred in the United States and Japan, that have reached above $10 billion in insured losses.”

Over Fort Mac today. We owe our gratitude to the firefighters who worked so hard to preserve and protect the city. pic.twitter.com/melJmMInmq

With @RachelNotley @DavidYurdiga and @JustinTrudeau as they survey the damage caused by the #ymmfire #ymm pic.twitter.com/Q6wwgT38Kf

Good luck to our 3rd crew heading up north to #ymm. Great work by all crews #ymmfire pic.twitter.com/SC2py1KgiB

ATCO crews working on a structure in #rmwoodbuffalo to restore power as quickly & safely as possible #atcoresponds pic.twitter.com/ygDSrx0l8X