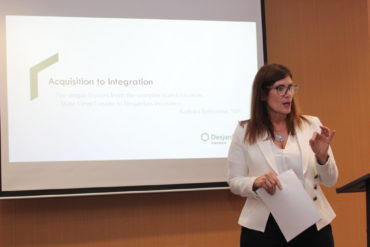 A merger between two direct carriers may seem simple enough, but stumbling blocks can quickly appear once you peel back the layers.

It’s a lesson Desjardins learned during its acquisition of State Farm. Things you don’t think about come to the forefront, like commonly used phrases carrying different meanings in front of different audiences.

During a recent breakfast talk in Markham, Ont., Barbara Bellissimo, senior vice president at Desjardins, gave an example of how she used the word “synergy” during a chat with a then-Desjardins executive, who took it negatively as to mean firing people. In fact, Bellissimo meant it positively as a way to express efficiency. Other times, what one side saw as a discussion, another viewed as complaining. It took time to iron out the differences.

“We would have these miscommunications,” she told the roughly 30 people in attendance. “It was fascinating.”

Cultural differences were regular speed bumps. Despite both being big companies, each valued some things differently than the other. State Farm, for example, highly valued relationships and leadership, while Desjardins emphasized rigour and pragmatism.

Bellissimo, a senior vice president at State Farm before moving to Desjardins during the acquisition, also explored the trajectory of the merger – from the announcement in 2014 through to today, when all red State Farm logos have officially been replaced with green Desjardins ones.

While both companies were direct, their internal models were different. State Farm was built on agent-run, brick-and-mortar offices in various communities. Desjardins was not. It meant making sure agents were happy when coming on board. 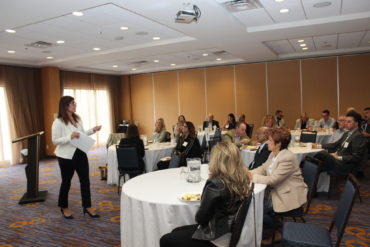 “Ninety-eight per cent of our agents came along with us,” Bellissimo said. “That was pretty impressive.”

A significant challenge Desjardins faced was in how to handle State Farm’s many internal systems and platforms. Most businesses that have a U.S. parent typically have separate operations in Canada. But State Farm had its systems, from policy to claims to compensation, wired into the U.S. group. That meant Desjardins had to disconnect State Farm from the U.S. end and create new systems from scratch. It also had to put together new compensation and marketing platforms for agents.

The company also knew things were going to be different once both sides integrated. Desjardins made sure key items were not overlooked, starting with timelines. That was crucial since it was up against a five-year window to transition from State Farm.

“That certainly didn’t come without consequences. When you stick to timelines, some things don’t get done,” Bellissimo said. “So you have to have a different type of mindset as you go through this process.”

The company developed a mantra – the “good enough” solution. When agility is key and timelines are a driving force, it’s important to not worry about something being absolutely perfect. “At the very beginning, I hated this [phrase] but it was very important [to remember],” she said.

The transition forced Desjardins to ensure constant communication with its people to keep them informed of the process and what was happening next.

“You can never have enough communication from beginning to end,” Bellissimo advised.