Does COVID lockdown constitute ‘prevention or hindrance of access’ under BI?

Clients who lost business income during the pandemic might not get coverage even if they have coverage for “prevention or hindrance of access,” but this depends on exactly how the policies are worded.

The High Court of England and Wales released earlier this month its verdict in a test case launched by the Financial Conduct Authority.

“For the policy wordings that cover prevention of access due to advice or action by a public authority, the court really parsed the language of those policies very closely,” said Eric Charleston, a Toronto-based insurance coverage lawyer with Miller Thomson LLP.

“There were a number of steps that underwriters or policyholders will have to go through in order to determine whether there is coverage.”

With its test case, the FCA took eight insurers to court over 21 business interruption policy wordings seeking clarity on whether they provide coverage for BI-related to government orders or advice to shut down a workplace. There is speculation that the verdict will be appealed.

None of the policies in the test case explicitly cover or exclude pandemic. None require physical damages to the premises. Some provide coverage if a disease occurs within a certain radius of the premises. Others have denial of access type clauses.

One covers BI for “prevention of access to The Premises due to the actions or advice of a government or local authority due to an emergency which is likely to endanger life or property.”

The court agreed with the insurer on that particular policy, noting that some categories of businesses — such manufacturing, accountants, lawyers, recruitment agencies and construction — were permitted by the British government to remain open. So the social distancing precautions imposed by the government may have impeded or hindered business but did not actually prevent access.

Another policy in the test case covers BI for “an incident occurring during the period of the insurance within a one mile radius of the insured premises which results in a denial of access or hindrance in access to the insured premises, imposed by any civil or statutory authority or by order of the government or any public authority, for more than 24 consecutive hours.” 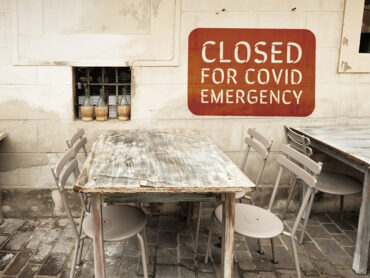 The FCA argued that for this policy, an incident can be local, regional or national and, provided that its occurrence encompasses the applicable one mile radius, there is cover.  But the court agreed with an insurer who argued that incident means an event — such as bomb scare, gas leak or vehicle accident — which happens at a particular time, at a particular place, in a particular way.

Another BI policy in the test case has a prevention of access-non damage clause which could cover a bomb threat, an illegal occupation or “the actions or advice of the police, other law enforcement agency… governmental authority or agency in the Vicinity of the Insured Locations …  which prevents or hinders the use of or access to Insured Locations during the Period of Insurance.”

The verdict in the test case is binding only in Britain on the insurers named as defendants, in respect of the 21 policy wordings.

But for any of the defendants insuring Canadian clients with the exact same policy wordings, “they will likely have to live with the ultimate outcome of the test case,” Miller Thomson’s Charleston told Canadian Underwriter. This is because the test case verdict would likely be persuasive to a Canadian court hearing a coverage dispute over the same policy wording and same arguments.

“For insurers that did not participate in the test case but have similar wordings, they should be prepared for Canadian courts to look to the ruling of the British court in the test case,” said Charleston.

Some of the denial-of-access clauses in the FCA test case may require a government order that has the force of law, in order to trigger coverage, said Charleston.

“In those cases, advice or guidelines that do not have legal sanction behind them will not suffice to trigger coverage.”

The British Court considered whether the inability to use or restriction on access means a full cessation of business activity or whether a substantial disruption was enough to trigger coverage, said Charleston.

“One has to look at the composition of the insured’s business at the time that the insurance policy took effect.”

If restaurants were closed due to a government restriction, then one has to look at the operations of the restaurant before the restriction and what they were after the restriction took effect, in order to determine whether or not there was an inability to use or restriction on access sufficient to trigger coverage.

Say a restaurant served both customers seated on the premises in the dining area and takeout prior to the government imposing restrictions. “If those restrictions stopped restaurants from letting people eat on premises but still allowed them to sell takeout, then that restaurant would have to prove that the government restriction amounted to a true inability to use their premises. They might not be able to prove it because their takeout business might have been a very significant component of their total business before the imposition of the restriction,” said Charleston.

“However, if a restaurant had very little or no takeout business before the restriction was imposed, an insurer may not be able to argue that the use of the premises was not prevented, even if that restaurant is permitted to sell takeout with the restrictions in place.”