CALGARY – About 400 jobs are expected to disappear at Suncor Energy Inc.’s oilsands mines in northern Alberta as it deploys driverless ore-hauling trucks to replace the ones humans operate now. 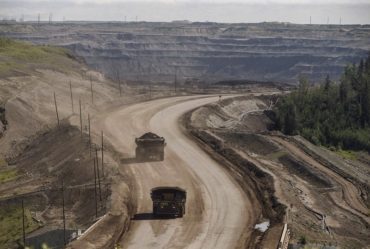 A heavy hauler trucks transports material from Suncor’s North Steepbank Mine in the oil sands in Fort McMurray Alta, on Monday June 13, 2017. Suncor today announced it will proceed with the phased implementation of autonomous haulage systems (AHS) at company-operated mines, starting with the North Steepbank mine. THE CANADIAN PRESS/Jason Franson

“We have about 500 roles that will get eliminated through this and we’re going to add about 100. So the net change in our workforce is about 400 positions,” chief operating officer Mark Little said in an interview Wednesday.

The company has been testing the 400-tonne capacity Komatsu trucks for about four years and has nine now. It announced Tuesday it will gradually build a fleet of more than 150 driverless trucks over the next six years, starting with the North Steepbank mine at its Base Camp north of Fort McMurray.

Suncor is the first oilsands mining operation to adopt the technology.

Tokyo-based Komatsu Ltd. this week celebrated the 10th anniversary of deployment of its first autonomous truck at a Codelco copper mine in Chile, noting that more than 100 trucks now operate at four Rio Tinto Ltd. iron ore mines in Australia, the mine in Chile and at Suncor.

On Tuesday, Melbourne-based Rio Tinto announced its autonomous haul trucks had achieved the milestone of having moved a total of one billion tonnes of material without being involved in any injury accidents. In December, it announced it would expand its fleet of about 80 trucks to 140 by the end of 2019.

Suncor’s plan to test the autonomous truck systems was initially criticized by the Unifor union local because of job losses. But Little says Suncor is working with the union to minimize job impacts by retraining workers whose jobs will disappear.

The company has been preparing for the switch by hiring its truck drivers, including those at its just-opened Fort Hills mine, on a temporary basis, he added. Suncor said the earliest there will be a decrease in heavy equipment operator positions at Base Plant operations is 2019.

Little said the company will replace trucks that have reached the end of their useful life with new Komatsu trucks. He said they cost about $5 million each, not including the obstacle detection systems and computer gear needed for autonomy.

Some of Suncor’s newer existing trucks will be retrofitted, he added.

He said the autonomous trucks are so efficient – because they operate 24 hours a day and stop only for fuel – the company will need fewer trucks in the future than it employs now.

Komatsu says tires on its autonomous trucks last 40 per cent longer because the trucks avoid sudden acceleration and abrupt steering.

Rio Tinto’s trucks are controlled remotely from its operations centre in Perth, about 1,500 kilometres from the mines, but Little said Suncor is initially going to operate the trucks from control rooms at each mine site.