VANCOUVER – Drones are about to be added to the firefighting arsenal of the B.C. Wildfire Service. 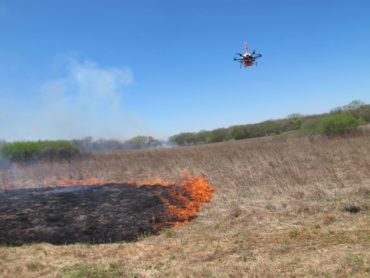 A drone designed to ignite controlled grass fires comes in for a landing in a field at the Homestead Monument of America in Beatrice, Neb., on Friday, April 22, 2016. University of Nebraska-Lincoln researchers are testing the drone as a possible tool for firefighters. (AP Photo/Grant Schulte)

Spokeswoman Erin Catherall says the service has conducted two seasons of trials and is ready to put the remotely controlled aircraft to work.

She says drones have already been an important part of the battle against recent wildfires in northeastern British Columbia because they are cheaper and safer than piloted aircraft.

They can also be used at night, when most helicopters and planes are grounded.

Catherall says that allows firefighters to identify hot spots for immediate action as soon as the sun rises.

The wildfire service also hopes the little aircraft will help with the efficient deployment of planes and crews during critical situations.

“They’re able to detect really hard to find hot spots and give co-ordinates that crews can then use to assist with locating and extinguishing the hot spots within the fire perimeter,” says Catherall.