Mississauga, Ont.-based Canadian P&C insurer Echelon Financial Holdings Inc. has reported a Canadian combined operating ratio of 94% for the three months ending March 31, down from 100% in Q1 2016 and driven by strong results in both personal and commercial lines.

Echelon recorded net income attributable to shareholders on continued operations of $7.5 million for the three months ending March 31, up from $0.9 million in Q1 2016. Net operating income was $2.3 million in the first quarter, compared to an income of $1 million in Q1 2016, Echelon said in a press release on Wednesday.

Commercial lines generated an underwriting income of $1 million compared to a $0.8 million underwriting loss in the same period last year, primarily due to strong performance in warranty, commercial property and liability lines, Echelon said in the release.

Direct written premiums increased by 30% to $54.6 million, primarily due to growth in Ontario personal lines and Quebec commercial lines, driven by broker transfers on existing products and the launch of new products in 2016. 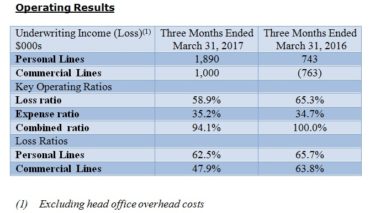 Echelon CEO Serge Lavoie said in the release that the company was pleased to report strong results in the quarter in both personal and commercial lines despite adverse weather conditions in the Maritime provinces. He added that Echelon’s “full suite of products is being well-received by the broker community, and the introduction of our enhanced systems will continue to support Echelon’s growth in 2017 and beyond. We look forward to further building our relationships with our brokers across Canada, and are committed to building strong and sustainable insurance solutions, aligned directly to their needs.”