Toronto-based Echelon Financial Holdings Inc. has reported a combined operating ratio of 93.5% for the second quarter of 2017 ending June 30, a 4.2 point improvement from 97.7% in Q2 2016, driven by strong results in personal auto and commercial property and liability.

The insurer, which operates in the property and casualty insurance industry in Canada, also reported a net income attributable to shareholders on continued operations of almost $3.2 million in Q2 2017, up 45% from $2.2 million in the same quarter last year.

Echelon, which released its financial results on Wednesday, said in a statement that its direct written premiums (DWP) increased 25% in Q2 2017 to $85 million from $67.7 million “as a result of growth in existing products in Ontario and Quebec Personal Lines, in addition to Commercial Lines products launched in 2016.”

“We are pleased with the results for the quarter with strong results reported in both Personal and Commercial lines,” Serge Lavoie, Echelon’s chief executive officer, said in the statement. “Our product suite continues to be well received by our brokers, with direct written premiums increasing by 27% in the first half of the year compared to 2016. As we complete the roll out of our new policy management system, we look forward to enhancing our services and to further build our relationships with our brokers across Canada. In British Columbia, we continue to work closely with our brokers and customers to manage the impact of the ongoing wildfires in the region.” 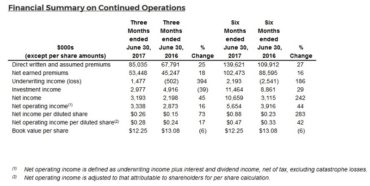 For the first six months of the year ending June 30, the insurer reported a net operating income of $5.7 million compared to $3.9 million for the same period in 2016, an increase of 42%. DWP increased 27% to $139.6 million from $109.9 million in H1 2016, “attributable to continued growth in Personal and Commercial lines, and portfolio transfers from existing and new brokers.”