Insured losses from natural catastrophes in 2017, at more than US$130 billion, were more than double the average of the previous 10 years, and more than US$90 billion in losses is probably from three hurricanes alone, Swiss Re said Wednesday.

Swiss Re said its preliminary data showed global insured losses from both natural and man-made disasters were about US$136 billion in 2017, compared to US$65 billion in 2016 and the previous 10-year annual average of US$58 billion.

2017 was “second costliest hurricane season on sigma records after 2005,” Swiss Re said in a press release. 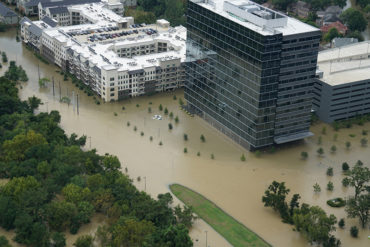 Hurricane Harvey was the first major hurricane to make landfall on the continental U.S. since 2005. Harvey made landfall Aug. 25, causing major flooding in Houston. Much of that flooding was uninsured, Swiss Re noted Dec. 22.

Hurricane Irma made two separate landfalls in Florida during the second week of September, causing major flooding in Jacksonville and widespread wind damage.

“Given the vast geographic footprint of the hurricanes, which affected multiple locations in quick succession and impacted multiple lines of business, a full assessment of the insured losses is still ongoing,” Swiss Re said. The latest estimate of insured losses from Hurricane Harvey, Irma and Maria combined is US$93 billion, Swiss Re added.

Swiss Re released Dec. 22 a preliminary estimate of total economic losses – worldwide from natural and man-made disasters – of US$306 billion. The average of the previous 10 years was US$190 billion, while 2016 was slightly below average at US$188 billion.

“More than 11,000 people have died or gone missing in catastrophe events, similar to 2016,” Swiss Re said. “Extreme weather in the US in the second half of 2017 has been the main cause of the high number of full-year insured losses.”

Before 2017, the wildfire the most expensive wildfire, since 1970, for the P&C industry, was the 1991 Oakland Hills, Calif. fire in 1991. That cost the industry about US$3 billion, adjusted for inflation, Swiss Re said in Natural catastrophes and man-made disasters in 2016, a report released in early 2017. In that report, Swiss Re ranked 40 disasters since 1970 by insured losses and another 40 by number of victims.

The deadliest disaster was in 1970, when a storm and flood left about 300,000 missing in Bangladesh. The most expensive was Hurricane Katrina, which hit New Orleans in 2005 and caused US$80.7 billion in insured losses, adjusted for inflation. Sixteen other North Atlantic hurricanes also made the list of the top 40 most expensive disasters since 1970.