A wrongful dismissal lawsuit – launched by an auto sales manager who was dismissed 23 months into a five-year term – could reach the Supreme Court of Canada. 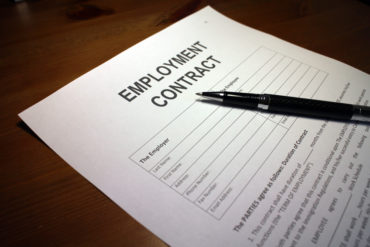 Court records indicate that John Howard was hired in 2012 as truck shop manager for Benson Group Inc. His written employment contract was for a five-year term. He was later transferred to the position of sales development manager of Benson Group’s auto service centre in Bowmanville, Ont.

Howard was terminated without cause in July, 2014.

Clause 8.1 in his employment contract stated: “Employment may be terminated at any time by the Employer and any amounts paid to the Employee shall be in accordance with” Ontario’s Employment Standards Act.

Benson Group “argued that its liability was limited to two weeks’ salary in lieu of notice,” Mr. Justice Bradley Miller wrote on behalf of the Court of Appeal for Ontario, in a ruling released April 8.

In that unanimous ruling, the Court of Appeal for Ontario found that Howard “is entitled to a contractual sum for the termination of his employment in an amount equal to his salary and benefits for the unexpired term of the Employment Contract.”

Justice MacKenzie found that Clause 8.1 was “sufficiently ambiguous as to be unenforceable” and that the employer’s “obligations are governed by ‘an implied term under the common law requiring “reasonable notice” for the termination of the employment'” of Howard.

In its unanimous ruling, The Court of Appeal for Ontario found that Justice MacKenzie erred in holding that Howard was entitled to common law damages.

On May 30, Benson group filed an application for leave to appeal with the Supreme Court of Canada, which has yet to rule on whether to grant leave.

Benson Group “sought to use a fixed term contract either to eliminate its severance obligation entirely or to limit it to two weeks’ notice on an early termination,” Justice Miller wrote. “It was, of course, free to do this. But the courts have consistently held that the consequences to an employee of such a bargain are so significant that the employer must communicate clearly in the contract that this is what it is intending to do.”

The court cited a previous Court of Appeal for Ontario ruling, released in 2001, in Ceccol vs. Ontario Gymnastic Federation.

Diana Ceccol was Administrative Director of the Ontario Gymnastic Federation from September 1, 1981 to May 9, 1997.

During that time, her employment “was governed by a series of one-year contracts,” wrote Mr. Justice James MacPherson of the Court of Appeal for Ontario.

In December, 1996, the 14 staff at the federation were told their contracts would “not be renewed or extended on June 30, 1997.” Then on May 9, 1997, Ceccol was told her services were no longer required after that date.

The judge hearing the trial ruled, in 1999, that Ceccol was on “an indefinite term, not a fixed term, employee and that she was entitled to reasonable notice, not the statutory notice” in the Employment Standards Act.

He fixed the reasonable notice at 16 months but reduced it by four months because of Ceccol’s failure to properly mitigate her damages.

Both sides appealed and both were unsuccessful.

A court “should be particularly vigilant when an employee works for several years under a series of allegedly fixed-term contracts,” Justice MacPherson wrote in Ceccol. “Employers should not be able to evade the traditional protections of [Ontario’s Employment Standards Act] and the common law by resorting to the label of ‘fixed-term contract’ when the underlying reality of the employment relationship is something quite different, namely, continuous service by the employee for many years coupled with verbal representations and conduct on the part of the employer that clearly signal an indefinite-term relationship.”

In Howard vs. Benson Group, Justice Miller wrote that “the conclusion that a contract is for an indefinite term has as a corollary that, in normal circumstances, the employer can terminate the contract only by providing reasonable notice,” but this principle is not absolute.

He quoted a 1992 ruling – by the Supreme Court of Canada – in Machtinger v. HOJ Industries Ltd.

Marek Machtinger was a car salesperson, and Gilles Lefebvre was a sales manager, for HOJ. Both worked for HOJ from 1978 through 1985. HOJ gave them four weeks’ pay after they were dismissed.

Lefebvre’s contract was identical except it provided for two week’s notice.

In 1987, a judge held that Machtinger and Lefebvre ought to have been given seven and 7.5 months notice respectively.

This was overturned by the Court of Appeal for Ontario, which ruled they were entitled to four weeks’ pay in lieu of notice.

The Supreme Court of Canada restored the lower court ruling.

“For the purposes of this appeal, I would characterize the common law principle of termination only on reasonable notice as a presumption, rebuttable if the contract of employment clearly specifies some other period of notice, whether expressly or impliedly,” Mr. Justice Frank Iacobucci wrote on behalf of the Supreme Court of Canada in 1992 in Machtinger.

“If an employer does not use unequivocal, clear language and instead drafts an ambiguous or vague termination clause that is later found to be unenforceable, it cannot complain when it is held to the remaining terms of the contract,” Justice Miller wrote in 2016 Howard.