An evacuation order remains in effect for 156 properties in southern British Columbia as a result of the Bear Creek wildfire. 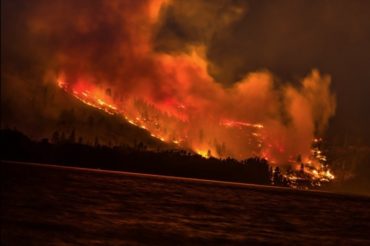 Another 14 properties in the Pine Point subdivision off Westside Road, north of Traders Cove remain on evacuation alert, COEO said in a news release on Monday. “Those residents should be prepared to leave on short notice should conditions change,” the release said.

COEO said that cool overnight temperatures and and low winds supported crews monitoring and patrolling the Bear Creek wildfire. As of 6:30 a.m. on Monday, no dwellings have been lost to the fire, although some outbuildings (sheds) may be damaged, the release said.

Structural fire crews from West Kelowna, Peachland, Wilson’s Landing and firefighters from the BC Wildfire Service have also spent the overnight hours putting out hotspots along the perimeter of the fire. As of 11:41 a.m. on Monday, the fire, located 6.5 kilometres northwest of Kelowna, was 25 hectares in size and 0% contained, according to the BC Wildfire Service.

British Columbia’s Ministry of Forests, Land and Natural Resource Operations reported on Friday that hot and dry weather, along with strong, gusty winds, was forecasted throughout the province on the weekend. “The BC Wildfire Service is preparing for increased wildfire activity and urges the public to be cautious with any activities in the backcountry,” the ministry said in a statement.

The fire danger rating throughout the province is generally “moderate” to “high,” with many pocket of “extreme,” the ministry said.

From April 1 until noon on Aug. 18, the BC Wildfire Service responded to 873 wildfires, 403 of which were caused by people. “Human-caused fires are completely preventable and divert critical firefighting resources from naturally occurring, lightning-caused wildfires,” the ministry said.