The province of British Columbia is hosting an exercise to test the BC Earthquake Immediate Response Plan and promote interagency co-operation among both internal and external agencies that support emergency response. 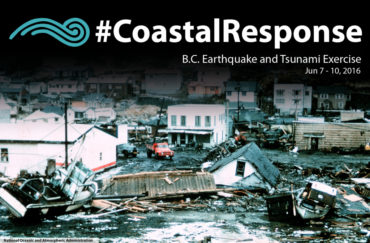 From Tuesday to Friday, Exercise Coastal Response, the province’s first full-scale earthquake and tsunami response exercise, will bring together stakeholders from all levels of government, as well as Emergency Management BC staff, First Nations, Crown corporations, critical infrastructure owners and non-government organizations involved in provincial-level response to model how they would collaboratively work to respond to the impacts of a catastrophic event along coastal B.C.

Exercise Coastal Response is based on a magnitude 9.0 earthquake occurring off the shore of southwestern B.C. as a result of a rupture of the Cascadia Subduction Zone, the province’s Ministry of Transportation and Infrastructure said in a press release on Sunday. The earthquake scenario will generate a tsunami impacting the west coast of Vancouver Island minutes after the initial shock. The exercise is a mix of real-time activities and simulated situations involving functions such as emergency operations, logistics, medical care, mass care, public information and operational communications, the ministry explained in the release.

During the same timeframe, neighbouring states and the U.S. Federal Emergency Management Agency Region 10 are conducting an exercise called Cascadia Rising, which involves municipalities and counties in the western half of Washington and Oregon, as well as parts of Idaho.

As well, Canadian federal departments involved in earthquake response will be conducting Exercise Pacific Quake and Exercise Staunch Maple, the release said. The former exercise will include the local federal coordination departments who have a presence in the lower mainland and Vancouver Island, such as the Canadian Coast Guard, Transport Canada, Public Health Agency of Canada, and will extend to the Government Operations Centre in Ottawa. For Exercise Staunch Maple, the Joint Task Force Pacific, the lead Canadian military formation in B.C., have a range of activities planned, some of which are linked to Exercise Coastal Response activities located along the west coast of Vancouver Island, the release said.

The Ministry of Transportation and Infrastructure noted that the exercise comes five decades after a tsunami in Port Alberni devastated local residences and businesses. On March 27, 1964, a massive earthquake struck Prince William Sound in Alaska. The earthquake registered 9.2 on the Richter scale and lasted four-and-a-half minutes, which made it the most powerful recorded earthquake in U.S. history, and the second most powerful earthquake ever recorded in the world, the ministry said in the release. The tsunami waves resulting from this earthquake claimed over one-hundred lives in the U.S.

In this photo taken May 24, 2016, U.S. Army Spc. Dedric Bryant, right, of Fort Eustis in Newport News, Va., works to assemble temporary living structures at Joint Base Lewis-McChord in Washington state that will be used by troops taking part in a massive earthquake and tsunami readiness drill overseen by the Federal Emergency Management Agency on June 7-10, 2016. (AP Photo/Ted S. Warren)

Just after midnight on March 28, 1964, tsunami waves from the earthquake funnelled up 40 kilometres of the Alberni Inlet, amplifying their height and impact, and a series of waves lifted homes off their foundations and upended cars. In all, approximately 300 homes and businesses were damaged in and around Port Alberni.

Much has changed in British Columbia’s earthquake response in the five decades since the 1964 Alaskan earthquake, including better building codes, increasingly accurate early response technology, the formation of response groups like Emergency Management BC (EMBC) and the appointment of Naomi Yamamoto as B.C.’s first Minister of State for Emergency Preparedness, the release said.

Today, in the event a tsunami watch, advisory or warning is issued by the National Tsunami Warning Centre, the Provincial Emergency Notification System (PENS) is activated by EMBC and relays this critical information to local governments, emergency officials, media, first responders like police and fire departments, as well as partner agencies like the coast guard and military. PENS can initially transmit approximately 800 automated voice notices and 450 emails. The notifications are then further redistributed through government social media channels, federal advisories, partner agencies, marine radio and a number of other agency systems.

“Although the devastation that resulted from the 1964 Earthquake happened over five decades ago, there are many lessons our government has learned from it and it helps to illustrate why we, as a government, are investing so much into Exercise Coastal Response and into emergency preparedness as a whole to help protect the communities of B.C. and each and every British Columbian,” Yamamoto said in the release.