Should Canada’s rules on railway insurance be changed?

If your answer is yes, contact the Canadian Transportation Agency (CTA) within the next four months explaining why. 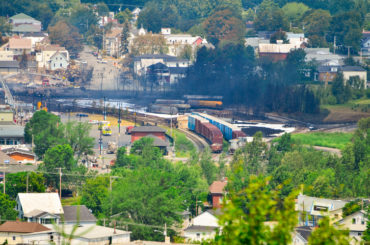 CTA, which has the power to issue and revoke certificates of fitness for federally-regulated railways, announced Thursday it is launching consultations on regulations – including insurance.

Federal law requires railway companies to have anywhere from $25 million to $1 billion in liability insurance. The intent is to make sure people injured in accidents and people who suffer property losses can get compensated. It also ensures railways will pay to clean up pollution caused by accidents.

CTA is looking for feedback on whether the documentation it requires from railways is appropriate for either determining a railway’s minimum insurance requirements or confirming whether they actually hold the required insurance amount.

The deadline to submit comments is Sept. 30.

As part of the consultation, the scope of which goes beyond insurance, CTA is asking the public whether it should “clarify” the rules stipulating how freight rail operators file their insurance information.

Before 2016, federal law did not mandate specific levels of coverage. It only required railway operators to be covered for third-party liability, third-party bodily injury or death. CTA would review each railway’s insurance coverage on a case-by-case basis.

The rules were tightened as a result of the 2013 tragedy in Lac-Mégantic, Quebec. A parked and unattended freight train hauling 72 oil tanker cars, moved downhill and derailed. As a result, 47 were killed, 40 buildings were destroyed, 53 vehicles were destroyed and about 6-million litres of crude oil were released.

CTA suspended Montreal, Maine and Atlantic (MMA) Railway’s certificate of fitness, finding that MMA had not demonstrated its third-party liability coverage was adequate. At the time, court records indicated MMA was insured by XL Insurance Company Ltd. for pollution clean-up expenses, bodily injury, and property damage, with a per occurrence limit of US$25 million.

Under the current rules, rail operators carrying “significant volumes of dangerous goods” require $1 billion in insurance, including coverage for pollution.