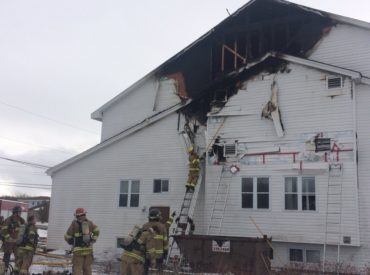 A fire at a historic church just east of Halifax has caused extensive damage. Photo: @briggins.

Firefighters from five stations were called Wednesday at 9:30 a.m. to extinguish a stubborn blaze inside St. Thomas Baptist Church in North Preston, N.S., which is home to about 4,000 people.

No one was hurt, but the rear of the century-old, wooden building was left with a gaping, charred hole that reaches to the peak of the roof. Foul play is not suspected and the cause remains unclear.

Some members of the church said the fire is a devastating blow to the tightly knit area, which describes itself as “Canada’s Largest Black Community.”

Lisa Smith said she has been attending services at the church since she was a girl.

“It’s too important because there’s the choir, there’s funerals that go on, it’s everything, it’s our next home,” she said.

North Preston: all visible fire extinguished, crews checking air quality and doing some overhaul on the C side pic.twitter.com/VOEm0V29OD

“It’s really devastating, it’s heartbreaking and it’s going to affect our community really bad because there are all kinds of things that go on in our church … Our church is used all the time.”

Last Saturday, a funeral was held for well-known 97-year-old resident Gracie Mae Glasgow, who many in the town referred to as “Momma.”

“She was my aunt,” said Robert Tupper, who lives down the street with his wife and daughter. “She produced a small town herself.”

He said the church is the “pillar of the community.”

A majority of the community’s population is African Nova Scotian – most of them the descendants of Black Loyalists who came as refugees after the American Revolution. Another wave of black refugees from the United States arrived after the War of 1812.

Tupper said he’s confident the church will be repaired.

“You can’t be too upset about it,” he said. “It’s just something that happens and you get past it. You don’t waste time lingering on that stuff.”

Kevin Dean, a division commander with Halifax Fire, said the flames were difficult to extinguish because they were in a crawl behind a false wall.

The church has been renovated many times in the past 100 years.

“Any old building like that, when people decide to build on … and then there’s two outside walls with a void in between – those voids become chimneys when there’s a fire,” he said in an interview. “The crews had to be a bit creative and tear out a few walls out to get to the fire … I’m sure they will be able to rebuild.”

– By Michael MacDonald in Halifax.

North Preston: all visible fire extinguished, crews checking air quality and doing some overhaul on the C side pic.twitter.com/VOEm0V29OD