Explosions this past weekend in the Eastern United States have “implications for the modeling of terrorism risk,” Risk Management Solutions (RMS) Inc. stated Monday in a release. 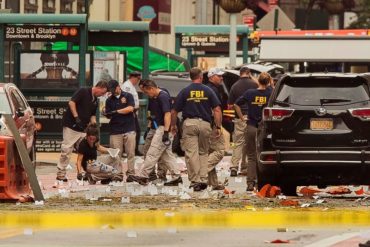 Members of the Federal Bureau of Investigation (FBI) carry on investigations at the scene of Saturday’s explosion on West 23rd Street and Sixth Avenue in Manhattan’s Chelsea neighborhood, New York, Sunday, Sept. 18, 2016. An explosion rocked the block of West 23rd Street between Sixth and Seventh Avenues at 8:30 p.m. Saturday. Officials said more than two dozen people were injured. Most of the injuries were minor. (AP Photo/Andres Kudacki)

The Associated Press reported that an improvised explosive device (IED) exploded Saturday night in the New York City neighbourhood of Chelsea, injuring 29. Then on Sunday, a pipe bomb exploded in Seaside Park, New Jersey.  No one was injured and a charity race was cancelled.

Those incidents “have implications for the modeling of terrorism risk,” RMS terrorism expert Gordon Woo stated in a release. “From what is known about the improvised explosive devices (IEDs), the cumulative death toll from these bombs might well have exceeded fifty, which is the threshold for classification as a ‘macroterror’ attack in RMS models.”

RMS has done simulations using computational fluid dynamics to “simulate how blast hazard waves propagate, deflect off buildings, and damage different kinds of structures,” Chris Folkman, senior director product management for RMS, told Canadian Underwriter in an interview this past June. “These simulations have informed our hazard and vulnerability modules.”

At the time, Folkman added that terrorism is “a very difficult peril to insure” but there is “more data available to us today than there was a decade ago and if you have better data, you can build better models.”

AP reported Monday that Elizabeth, N.J. resident Ahmad Khan Rahami, a person of interest in the bombings, was arrested.

On Sunday, five explosive devices were discovered in a trash can a train station in Elizabeth, AP reported. One of those devices exploded while a bomb squad robot tried to disarm it. No one was hurt.

“Terrorism risk can differ by individual city blocks because if you think of the size of an attack footprint, it’s very very small compared to something like an earthquake or a hurricane,” Folkman told Canadian Underwriter in June.

A car bombing is one type of attack with a high hazard gradient, Folkman said at the time.

“Something like a car bombing – most of the damage is going to occur within 200-250 metres, so if insured value at risk moves by a few dozen metres, that can often mean the difference between no loss and a very severe loss,” Folkman noted.

“A key statistic for terrorism insurers is the relative frequency of small IED plots compared to large vehicle bomb plots,” Woo stated in the RMS release Monday. “The weekend’s event provides additional evidence to quantify this relative frequency and, in particular, it reflects a shift towards smaller sized IEDs.”

AP quoted a law enforcement official as saying that on Sunday, the Chelsea bomb contained a residue of Tannerite, an explosive often used for target practice that can be picked up in many sporting goods stores.

Cellphones were discovered at the site of both the New York and New Jersey bombings, but no Tannerite residue was identified in the New Jersey bomb remnants, in which a black powder was detected, said the official, who wasn’t authorized to comment on the investigation and spoke to the AP on condition of anonymity.

With files from The Associated Press