MONTREAL – Transport Minister Marc Garneau is calling for the creation of a tough national standard to penalize distracted drivers using their cellphones on the road. 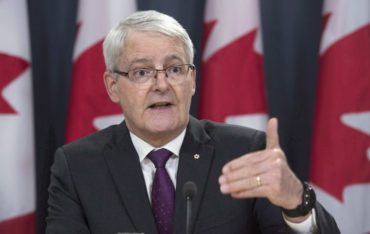 Minister of Transport Marc Garneau speaks at a news conference in Ottawa, Thursday, February 23, 2017. Garneau is proposing the creation of a tough national standard to penalize distracted drivers using their cellphones on the road. THE CANADIAN PRESS/Adrian Wyld

Garneau said Wednesday that having consistent national rules with stiffer fines and demerit points could address the growing number of incidents.

While dangerous driving is covered under the Criminal Code, cases involving distraction are a provincial responsibility with fines and demerit points that vary widely across regions.

Provincial penalties for distracted driving range from $80 to $100 plus three demerit points in Quebec to a maximum fine of $1,200 and five demerit points in Prince Edward Island, according to the Canadian Automobile Association.

Cellphones and handheld electronic devices are banned while driving in all provinces, the Yukon and the Northwest Territories, but there is no prohibition on driving while using hands-free devices.

“I would like it to be treated very, very seriously because to put it in simple terms, I consider that driving requires 100 per cent of your attention,” Garneau told reporters before heading to Washington for a meeting with U.S. Transportation Secretary Elaine Chao.

The minister recently sent a letter to his provincial counterparts urging them to agree to tougher and uniform penalties for texting and talking on cellphones while driving.

“Having robust and nationally consistent enforcement measures and penalties will help mitigate the negative impact of this increasingly pervasive problem on Canada’s roads,” he said in the three-page letter dated Feb. 21.

While Garneau has yet to get a response from provinces, he says governments need to act more quickly to this growing issue than it did in the past to combat drunk driving.

“Canada was slow as a country to acknowledge and act on this problem, and it would be regrettable for us to make the same mistake again with driving while distracted,” he said.

Garneau said the growing prevalence of cellphones with many apps make distracted driving an evolving issue.

He told provincial transport ministers that 2014 National Collision Database findings showed that 19 per cent of fatal collisions and 29 per cent of incidents causing major injuries involved some form of distracted driving.

A 2005 study by the Virginia Tech Transportation Institute found that nearly 80 per cent of collisions and 65 per cent of near-collisions involved some form of driver inattention up to three seconds prior to the event.

The minister declined Wednesday to say if he would like to see cars taken away from drivers found guilty of distracted driving, but said stricter penalties are required.

“I personally feel it should be at the higher end rather than at the lower end.”