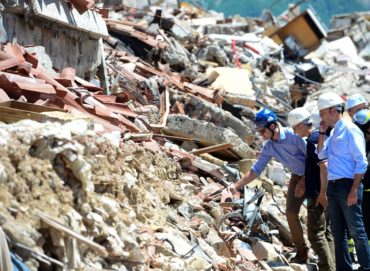 Prime Minister Justin Trudeau visits Amatrice, Italy on Sunday, May 28, 2017. The area was effected by an earthquake that occured in August 2016. THE CANADIAN PRESS/Sean Kilpatrick

The placement of Principal At-Risk Variable Rate Notes, with notational principal at 200 million euros, was through a newly formed special purpose vehicle domiciled in Ireland – Lion II Re DAC, Guy Carpenter said in a press release on Monday. The placement benefits Assicurazioni Generali S.p.A., an Italian insurance company and the parent company of the Generali Group.

This is the third time that Assicurazioni Generali S.p.A. has utilized the insurance-linked securities market and is the first ever 144A cat bond to provide indemnity protection against multiple Europe perils, Guy Carpenter reported.

The bond, with a scheduled maturity date of July 15, 2021, provides four years of per occurrence indemnity protection for Europe windstorms and Europe flood affecting selected European countries and earthquakes affecting Italy. It is also the first time that Europe flood has been covered in a 144A cat bond, said GC Securities, which served as lead structurer and sole bookrunner.

James Nash, CEO of Guy Carpenter International, said in the release that the company is “delighted to have successfully applied our capital agnostic approach within the European region as well as completed the first ever 144A cat bond exposed to Europe flood. This transaction was optimized to match Generali’s specific needs to the current appetite of capital markets investors while also matching the rest of the risk transfer program with the strengths of the traditional reinsurance market.”

Cory Anger, global head of ILS structuring with GC Securities, explained that “Generali’s balanced structuring decisions when renewing their prior Lion I coverage through the Lion II cat bond led to an expansion of the covered perils (including into non-modellable territories) and also achieving the first euro-denominated cat bond since 2015 despite negative interest rates in the euro-zone. All of this was achieved at the lowest ever differential between the Risk Interest Spread relative to the insurance risk (annual expected loss) in the history of the 144A cat bond market.”

Global head of ILS distribution with GC Securities, Chi Hum, said that Generali’s decision to sponsor Lion II Re away from the typical late Q3 and/or Q4 timeframe for Europe perils was rewarded with the broad-based and robust support of more than 20 investors that allowed the deal to be priced almost 15% lower than lowest end of initial guidance.”

Guy Carpenter & Company, LLC is a wholly owned subsidiary of MMC and a global risk and reinsurance specialist. Since 1922, the company has delivered integrated reinsurance and capital market solutions to clients across the globe. With over 2,300 professionals in more than 60 offices around the world, Guy Carpenter offers a combination of broking expertise, strategic advisory services and analytics.