Global insurance premium growth in 2015 was up to 3.8% in real terms compared to 3.5% in 2014, illustrating a steady performance, but bringing with it a mixed outlook, Swiss Re points out in its latest sigma report.

Global premium written were US$4,554 billion in 2015, “which in nominal terms was 4.2% less than the previous year, due to significant currency depreciation against the US dollar,” states the new report, World insurance in 2015: steady growth amid regional disparities.

“The euro lost significant value against the USD (-20%), and U.K. sterling (GBP) and the Japanese yen (JPY) were also impacted, as were advanced-market commodity exporters (Australia, Canada),” it notes.

“Among the advanced markets, the U.S. economy expanded by 2.4%, while growth in Canada fell to 1.2% from 2.5% in 2014. Total GDP growth in North America fell to 2.3%, slightly short of the pre-crisis, but 1 ppt more than the post-crisis annual average growth rate,” the Swiss Re report explains.

“The overall performance was steady after a 3.5%-gain in direct insurance premiums written in 2014, and coming in an environment of just moderate (2.5%) global economic growth, the latter a key driver of insurance demand,” notes a company statement last week announcing the availability of the report.

“On the non-life side, strong growth in the advanced markets of Asia, and improvement in North America and Western Europe, contributed to a 3.6% increase in global premiums, up from 2.4% growth in 2014,” Swiss Re notes.

The 2015 increase was based on strong growth in advanced markets, while the performance in emerging markets was mixed, the press release states.

More specifically, advanced Asia at +4.1% registered the highest growth, while North America saw a +3.2% also. Growth was more moderate in Western Europe at +1.5%, but still a significant improvement on previous years of stagnation, Swiss Re explains. Emerging markets, for their part, continued their robust premium growth trend (+7.8%), primarily driven by China, the statement adds. 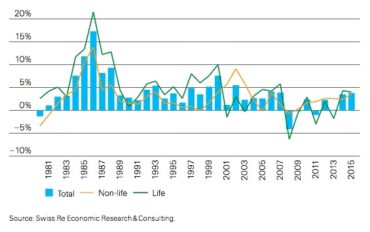 Despite the 2015 increase, premium volumes in U.S. dollars “at running exchange rates contracted by 4.2% in 2015. This could be seen as a sign of weakness of the insurance sector, but it is only caused by widespread currency depreciation against the U.S. dollar,” Swiss Re points out.

There were 353 disaster events in 2015, of which a record 198 were natural catastrophes, the highest number ever recorded in a single year, the report states. Total economic losses caused by all disasters were estimated at US$92 billion in 2015, down from US$113 billion in 2014 and below the inflation-adjusted average of US$192 billion for the previous 10 years, it notes.

“Overall, the insurance sector covered US$28 billion of losses from natural catastrophes and US$9 billion from man-made disasters in 2015. However, there was a large difference of US$55 billion between total and insured losses, highlighting the lack of insurance protection globally against catastrophe events.”

“Interest rates and the macroeconomic and financial market environments will continue to shape the outlook for the insurance industry,” Kurt Karl, chief economist for Swiss Re, says in the statement. “Profitability in non-life will also remain subdued on still-low investment returns and soft pricing conditions.”

But continuing to be well-capitalized – solvency in the non-life sector was at a record high of 130% in 2015 – means insurers are better able to withstand periods of economic or market turmoil, although the support from higher unrealized gains as a result of ultra-low interest rates will disappear once rates begin to rise in the U.S. and United Kingdom, mainly.

“The overall profitability of non-life insurance, measured by ROE, declined from 9.0% in 2014 to 7.2% in 2015. Underwriting and investment results both declined,” notes the report.

“Investment income as a percentage of net premiums earned in eight major markets, including Canada, fell by 0.7 ppt to 9.2% in due to the low interest rate environment. Underwriting results were also down as the pace of reserve releases slowed.”

“Global non-life sector growth is expected to weaken due to moderate economic activity and soft pricing, mainly in the advanced markets,” the statement notes. “The outlook for the emerging markets is mixed,” Swiss Re notes.

“The outlook for the non-life industry in advanced markets is more muted than for life, given expectations of a moderate economic recovery and pricing weakness,” the report states.

“The outlook for non-life in the emerging markets is mixed. Premium growth will likely be strong in emerging Asia, mainly supported by China. In other emerging regions, however, premium growth is expected to weaken or even contract,” it adds.

The report notes that the global economy faces four major headwinds that will produce periods of market volatility alongside moderate growth in 2016 and 2017: the US Federal Reserve will continue to raise interest rates; China continues to open its capital account; commodity prices have stabilized at low levels and are unlikely to increase substantially; and global political developments continue to create uncertainty. “Nevertheless, in advanced markets economic fundamentals remain strong,” it adds.

The report includes a special chapter on global trade and the implications for insurance sector growth. “The trade slowdown has reduced global growth, which, in turn, impacts insurance premium growth generally,” Swiss Re explains.

“Given that the structural factors behind the trade slowdown are likely to persist, a persistent slowdown in global trade will lead to lower growth in marine and credit insurance in particular,” the company statement points out.

More News
Related
Global premiums up in 2016, growth lower but outlook still positive: Swiss Re
PERILS estimates property market loss for Cyclone Debbie at AU$1,116 million
Net income for Swiss Re US$1.2 billion in 2017 H1, down from about US$1.9 billion in 2016 H1
Cats a significant driver in Everest Re Group’s posting US$639.4 million net loss in 2017 Q3