Global insurance industry to see “slightly increased” growth by 2018, P&C premium volume to grow by 4% on average: Munich Re

The global insurance industry is likely to see slightly increased growth by 2018, Munich Re reported on Thursday. 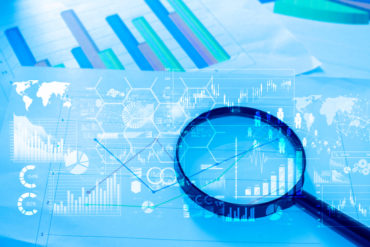 Munich Re said in a press release that better economic prospects in the United States and in many emerging markets will offset negative factors such as declining growth in the Chinese market. In the longer term, the emerging markets of Asia will have the greatest growth potential, and their share of primary insurance premium is expected to be on a par with that of Western Europe in the next few years.

While premium income is likely to grow only nominally this year, slightly higher real growth of 3% is expected for 2018, the release said. “Premiums in the insurance sector are therefore likely to evolve in line with the global economy, which should show real growth of 2.9% in 2017 and 3.1% in 2018,” the reinsurer said. “Projected premium growth will thus be slightly higher than that of 2016, and significantly exceed the average growth rate of almost 2% for the past ten years.” 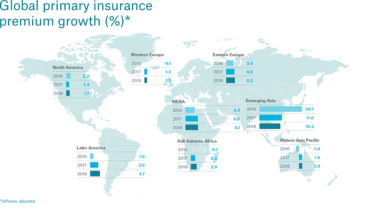 Michael Menhart, chief economist at Munich Re, noted that “the economies of many emerging markets, such as Brazil, but even Russia, are experiencing a significant recovery. This is leading to increased growth in property-casualty insurance. In most of the industrialized world – in the eurozone, the USA and Japan – demand has been bolstered by a solid economic environment.”

While Menhart projected that life insurance will see “only marginal growth owing to the low-interest-rate environment, by contrast demand in the emerging markets will continue to rise appreciably. Growth prospects for insurers are therefore looking a little brighter worldwide.”

In property and casualty, premium volume will grow by an average of 4% (almost 2.5% in real terms) this year and next, Munich Re said, adding that projected inflation-adjusted growth will be roughly half a percentage point below global economic growth. The emerging markets of Asia, and increasingly also the Middle East and North Africa region, are likely to exhibit the strongest growth rates, the reinsurer predicted, noting that the established markets of Europe and North Africa will naturally see a much lower rate of expansion.

“There are many different reasons for the weaker pace of growth in property-casualty insurance,” the release pointed out. “The insurance industry is now beginning to respond to mounting pressure in a number of industrialized countries. Companies have been consistently developing their business models; new products, sales channels, and coverage concepts have been cultivated for new risks such as cyberattacks; and IT systems have been modernized. As a result, new business opportunities are gradually opening up in these markets.” 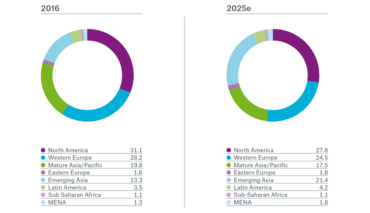 In life insurance, premium growth, which is driven by growth markets in Asia and Latin America, is expected to increase by over 4.5% on average (3.0% in real terms) – somewhat more than economic growth. In the Asian emerging markets, growth will weaken following last year’s “extraordinary surge” in premium volume in China, but it will still be significantly above 10% in real terms, Munich Re said. In Latin America, premiums in life insurance are likely to grow by almost 8.5% (over 6.5% in real terms) this year and next. Prospects in the industrialized countries continue to be clouded by “persistently low” interest rates, the release said, and “premium growth here is likely to fall short of economic growth. However, strong premium expansion in the emerging markets will almost fully compensate for the moderate development in the industrialized countries.”

As for emerging markets, given their strong growth rates, they are gaining more and more weight in the international insurance industry: the emerging markets’ share of the anticipated additional premium volume is expected to rise from 20% in 2016 to 47% by 2025. Rising standards of living and increasing insurance coverage needs are two major contributory factors, Munich Re said, while interest rate increases and demographic trends could revitalize the life insurance segment in the industrialized countries as well. It is expected overall that, by 2025, the market share of emerging markets in Asia will – at 21.4% – draw close to that of Western Europe (24.5%). North America will remain in the lead at 27.8%.