Global reinsurer capital rose by 5% to US$595 billion at Dec. 31, 2016, according to the latest edition of the Aon Benfield Aggregate (ABA) report. 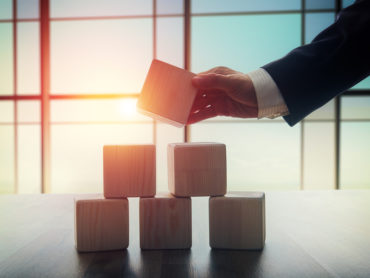 The report, released on Tuesday, highlights trends in property and casualty reinsurance through the analysis of 23 major reinsurers domiciled in developed markets, Aon Benfield explained in a statement. On a combined basis, these companies write approximately 50% of global P&C reinsurance premium, said Aon Benfield, a division of Aon plc and a reinsurance intermediary and full-service capital advisor.

The study found that the ABA combined ratio rose by 2.9 percentage points to 93.5% in 2016. Major losses contributed 5.5 percentage points, while reserve releases provided 5.3 percentage points of benefit. P&C underwriting profit reported by the ABA companies fell by 28% to US$9.1 billion, of which US$7.5 billion was derived from prior years (83% of the total).

P&C premiums written by the ABA companies rose by 6% to US$170 billion in 2016 – split between direct insurance at US$78 billion (46% of the total) and assumed reinsurance US$92 (54%) billion. “Recent growth in assumed reinsurance has been driven by franchise consolidation, large bespoke transactions, expansion in niche lines and growing leverage of alternative capital,” the report said.

Total gross premiums written by the ABA companies rose by 3% to US$242 billion over the year to Dec. 31, 2016, with the main driver being consolidation activity. The reduction in the prior year was heavily influenced by strengthening of the dollar in the United States relative to the euro, Aon Benfield said.

Aon Benfield also reported that reinsurers’ profitability has declined, but returns remain “reasonable” relative to current risk-free rates. ABA net income fell by 13% to US$17.5 billion last year. The total equity of the 23 aggregate companies rose by 4% to US$210 billion over the course of the year, driven primarily by solid earnings. The return on common equity stood at 8.4% compared to 10% in 2015, versus a median cost of equity of 7.6%. “Earnings have become increasingly dependent on catastrophe experience and prior year loss reserve development; share prices show heightened sensitivity to reported results,” the report said.

The report noted that most ABA companies are deriving “significant” benefits from their ability to leverage alternative capital. Reinsurers have been able to take advantage of lower catastrophe risk transfer costs through the formation of sidecar vehicles, sponsorship of catastrophe bonds and increased utilization of retrocession protection, Aon Benfield reported. This has reduced the cost of their underwriting capital and allowed them to grow positions with key clients, while reducing many peak zone probable maximum losses relative to capital held.

“Growing asset management mandates are allowing reinsurers to earn fee revenue, diversifying their earnings, while at the same time establishing capital market relationships that will be essential in a post-loss environment,” the report said. 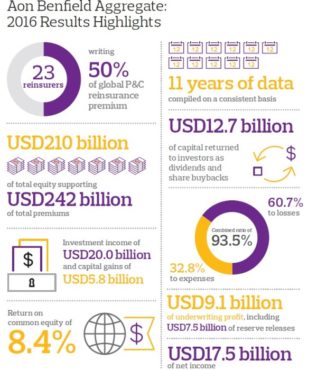