General Motors (GM) Canada announced on Friday an expansion of its engineering and software work in the country to support the development of “innovative new automotive systems and technologies for the future.” 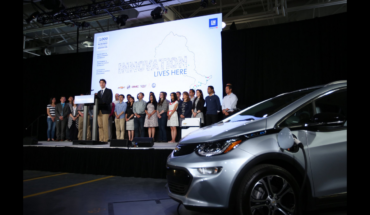 GM will invest $10 million in its Kapuskasing cold weather testing facility, where the company conducts testing for a wide range of new GM products and technologies. Photo: @Justin Trudeau.

GM said in a press release that it will expand its Canadian base to reach a total of approximately 1,000 positions over the next few years. The new GM Canada work will be focused on the areas of autonomous vehicle software and controls development; active safety and vehicle dynamics technology; and infotainment and connected vehicle technology, “all important areas for the development of new connected, autonomous and shared vehicles and mobility systems.”

This work will bring the company’s Oshawa, Ont. tech centre beyond its maximum capacity and as a result, GM will also soon open a new Automotive Software Development Centre in Markham, Ont. In addition, GM will invest $10 million in its Kapuskasing cold weather testing facility, where the company conducts testing for a wide range of new GM products and technologies, the release said.

.@GMCanada is counting on our innovation – creating 1000 cutting-edge engineering jobs in Canada. pic.twitter.com/2flY7x4ICZ

“With this expansion, GM Canada will play an important role in our evolution toward vehicles that are connected, autonomous, shared and electric,” said Mark Reuss, GM’s executive vice president of global product development, purchasing and supply chain.

Prime Minister Justin Trudeau said that when he met GM CEO Mary Barra at the World Economic Forum earlier this year, he made the case for investing in Canada. “I applaud GM for choosing Canada to be the home base for its global centre for advanced vehicle software development,” Trudeau said in the release.

Brad Duguid, Ontario’s Minister of Economic Development, Employment and Infrastructure, added that the announcement “sends a positive signal to the global auto industry that Ontario is the ideal location for developing and commercializing disruptive technologies. Our government will continue its close partnerships with industry, labour, and the innovation sector to secure the province’s long-term future as a leader for auto innovation and advanced manufacturing.”

At @GMcanada with PM @JustinTrudeau to learn about innovative tech to help grow our economy & fight #climatechange pic.twitter.com/4nPo5oc6qP