With property catastrophe prices dropping during the 2017 renewals, combined with natural catastrophe losses exceeding US$50 billion last year, global reinsurers are at greater risk of having negative underwriting results and will tend to “shy away” from property catastrophe business, Standard & Poor’s Financial Services LLC suggested in a report released Monday. 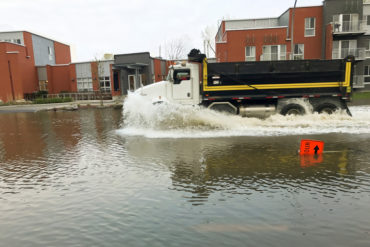 “The likelihood that natural catastrophe loss activity will push underwriting results into negative territories is rising,” S&P said in the report, Global Reinsurers’ Earnings Volatility to Increase as Exposure to Natural Catastrophe Risk Remains Largely Unchanged. “Exposure to catastrophe risk is an additional pressure point on profitability, and reinsurers that are overexposed might see deterioration of their competitive position over time.”

In that report, S&P referred to Impact Forecasting LLC’s 2016 Annual Global Climate and Catastrophe Report, released this past January. Impact Forecasting, an Aon plc subsidiary, reported that 315 separate natural catastrophes in 2017 caused insured losses of US$54 billion, above the mean of US$50 billion from 2000 through 2015.

S&P, meanwhile, reported that global property catastrophe prices were down about 4%-6% during 2017 renewals.

In its 2016 Annual Global Climate and Catastrophe Report, Aon Benfield noted that the most expensive natural disasters last year included an earthquake in April in Japan (US$5.5 billion), Hurricane Matthew (US$5 billion), flooding in Central and Western Europe (US$3.4 billion) and the Alberta wildfire in May, which Impact Forecasting pegged at US$2.8 billion. Also in 2016, four severe weather events in the United States resulted in insured losses of more than $1 billion each.

“Global weather mean losses for individual events on an economic loss basis have shown an annual growth rate of 1.4 percent since 1980,” Impact Forecasting said at the time.

Aon’s reinsurance brokerage, Aon Benfield, conducted a mean and median analysis on its own database, using weather events since 1980 that that caused at least US$50 million in economic losses and at least US$25 million in insured losses, adjusting those losses for inflation to 2016 U.S. dollars.

“The UN suggests that by the next census study in 2020, roughly half of the world’s population will live within 100 kilometers of an ocean coastline,” Impact Forecasting said in its report.

“There is growing evidence of how a warming atmosphere is leading to sea level rise, more unusual weather patterns and intense meteorological events that are beyond what has been recorded historically,” Impact Forecasting added.

“In the next couple of years, we expect that reinsurers will continue to shy away from property catastrophe business, and we consider upticks in risk appetite are unlikely, considering that further price decline in this space has been visible during 2017 renewals,” S&P said in its report released Aug. 14.