Higher fines for distracted driving to take effect in B.C. in June

The new penalties will be calculated using the base fine of $368 combined with escalating Insurance Company of British Columbia (ICBC) driver penalty point premiums, which start at $175 for the first offence and climb for any additional offence within a 12-month period, the provincial Ministry of Public Safety and Solicitor General said in a release on Monday. 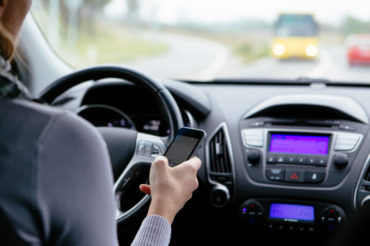 Effective June 1, distracted drivers are subject to the following:

“Significantly higher fines, more penalty points, and earlier interventions for repeat offenders – including driving prohibitions – will reinvigorate the province’s push to eliminate distracted driving, a leading factor in deaths on B.C. roads,” the ministry said in the release. [click image below to enlarge] 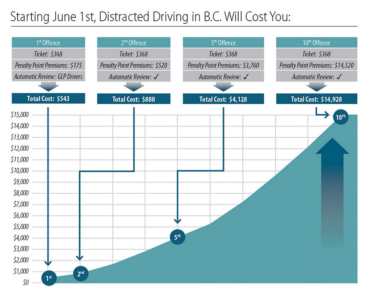 Further stiffening these consequences, distracted driving is being elevated to the threshold for “high-risk” driving offences, making it equivalent to excessive speeding and driving without due care and attention, the ministry said. Repeat offenders will also have their driving record subject to automatic review, which could result in a three-to-12 month driving prohibition.

Graduated Licensing Program drivers face intervention after a first distracted driving offence and a possible prohibition of up to six months, with longer prohibitions for repeat offences. The superintendent of motor vehicles also has discretion to prohibit drivers based on referrals from ICBC or police.

“These tough new sanctions reflect what government heard during a public consultation in which 90% of respondents indicated they support stronger distracted driving penalties to help make roads safer,” the release said.

An ongoing education and awareness campaign and partnerships, including those with law enforcement and ICBC, will also help encourage drivers to change the way they think about distracted driving, with the knowledge that it is high-risk behaviour with potentially fatal consequences. 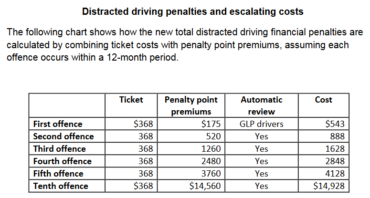 In 2014, distracted and inattentive driving was a contributing factor in killing 66 people and seriously injuring 630 more on B.C. roads. As well, over the past three years, approximately 50,000 distracted driving tickets have been issued annually.

Karen Bowman, founder and executive director, Drop It And Drive campaign, said in the release that “it’s encouraging that the B.C. government has chosen to make significant changes to the penalties for distracted driving; the increase in penalty points should have an impact, particularly on repeat offenders. There is still a lot of work to be done to reduce risky driver behaviour, but these stronger sanctions, combined with enforcement efforts and continued education are definitely steps in the right direction.”

Les Sylven, chief constable with the Central Saanich Police Services and president of the BC Association of Chiefs of Police, said that “we welcome these new rules. Drivers need to understand that choosing to use an electronic device while driving can be a fatal choice – stopping this dangerous behaviour will reduce the number of unnecessary and tragic collisions on B.C. roads.”