Sensational news stories about racial injustice in 2020 have prompted Canadian P&C insurance brokerages to take a corporate stand against racism and promote diversity and inclusion within their ranks, brokerage leaders observed in a recent Canadian Underwriter webinar.

Black Lives Matter protests in Canada and the United States dominated the news cycle during the pandemic in 2020, triggered in part by the death of George Floyd in Minneapolis, Minnesota. Floyd was killed in May 2020, after a police officer knelt on his neck for eight minutes and 46 seconds while making an arrest for a minor offence.

Brian Parsons, head of Canada for Willis Towers Watson, said the events in 2020 brought race to the forefront of his brokerage’s efforts to promote diversity and inclusion within its ranks.

“Historically, most of our diversity and inclusion efforts prior to May of 2020 were around gender equity and LGBTQ [lesbian, gay, bi-sexual, transsexual and queer] support,” Parsons said Wednesday at Canadian Underwriter‘s webinar, Brokerage Executive Outlook. “We made great headway by inserting disciplined processes to safeguard against unconscious biases. But in May of last year, race quickly jumped into prominence, and our organization played catch-up really quickly.

“I don’t think I’m alone in saying that as a White person, I have come to a much deeper appreciation of what Black, Indigenous, and people of colour face in and outside of the workplace.”

Parson said his brokerage responded with a transparent action plan based on three pillars – recruiting, career development, and culture. Among the action items is reverse mentoring. For example, Parson meets for 45 minutes every month with a young employee from Cameroon who shares her experiences with him. The brokerage is also trying to collect data on race, asking employees to voluntarily provide information, to help identify the racial composition of its workforce across Canada.

Tina Osen, president of Hub International Canada, observed that the events of 2020 signaled the end of a bygone era when people checked their personal values at the office door.

“Employees are now carrying those [personal values] into the office,” she said. “Certainly, our current and future employees will have a major expectation of their employers to be socially responsible as organizations. And I really believe that candidates are going to be attracted to coming to work for business and employers that are making a difference in their recruitment strategy and in their communities.”

For Hub, that means casting a wider network for recruitment, Osen said, as well as leadership training around unconscious biases. It means making sure that employees “feel included, respected, and are considered valued members of the team,” Osen said. It also means the creation of employee resource groups, in which people with shared characteristics or life experiences can come together to help promote their personal and professional development.

Sarah Robson, president and CEO of Marsh Canada, echoed the point that brokers’ clients, employees, and potential new recruits now expect their employers to take a stand in favour of diversity and against systemic racism.

“The horrendous events of 2020 drove a change,” Robson said. “Our colleagues and our new recruits are expecting us to take positions on things that historically we typically wouldn’t have done. That’s something that’s very positive. 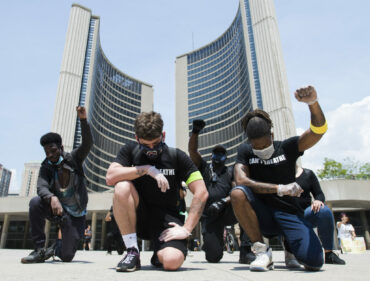 People protest in solidarity with the George Floyd protests and honouring black lives that have been lost at the hands of police across the United States in Toronto on Friday, June 5, 2020. THE CANADIAN PRESS/Nathan Denette

“We came out very, very strongly and put in writing that Marsh & McLennan rejects racism, bigotry and all types of discrimination in all their forms. And it’s committed to fundamental principles like human dignity, equality, community and mutual respect. That’s fundamental to what we are as humans.”

For its part, Marsh signed the Black North Initiative pledge, which brings together CEOs from across the country with the common goal to end anti-Black, systemic racism, said Robson. “I was overwhelmed by the impact that it had on our colleagues, [as reflected in] the responses we’d gotten. They were so favourable, just in terms of making that statement.”

Robson added that from her point of view, brokers have broadly shown empathy to others because of the circumstances of the pandemic; this also translates to brokers’ responding empathetically to those suffering from racial discrimination.

Dave Partington, CEO of Gallagher Brokerage Canada, talked candidly about the personal impact of the discussions he has had following the events of 2020.

“I will openly admit I was not self-aware personally of the challenges faced by people in minority groups, and I had some really difficult conversations with people,” Partington said. “These are difficult conversations for a Caucasian guy to have. But I think that’s helping me to become better, and I know it’s helping many people to become better.

“This isn’t something that you can push off as a corporate initiative. You need to know more, you need to behave better, and you need [that knowledge] to drive the organization.”

To which Robson added: “It’s not an initiative, it’s an imperative.”

5 Comments » for How Canadian brokerages are addressing systemic racism