Older green energy equipment is not equipped with the latest technology to protect it from increasingly severe weather events, meaning more claims activity for insurers, according to an expert in the area.

Insurers have been seeing the effects of climate change on the property side of their books for some time, but now they are witnessing a similar dynamic in the energy line of business, said Darren Tasker, head of energy and construction in Canada for Allianz Global Corporate & Specialty. Whether it’s flood, wind, or hail, all of these perils are a factor in an increasing number of claims in the energy sector.

Many companies are touting the use of green technology. But if that energy is being produced by older equipment, the risk of a claim increases.

“On the solar side, we’re seeing the number of forest fires in Alberta and B.C. increase,” Tasker told Canadian Underwriter. “For these [solar] assets, which are in remote areas, it’s a significant concern. The big topic on which underwriters and engineers are focused is vegetation management. They want to make sure there’s enough clearance there so that, if there is a forest fire or wildfire, it would not impact the site [where the solar equipment is present]. But that’s certainly a major concern.” 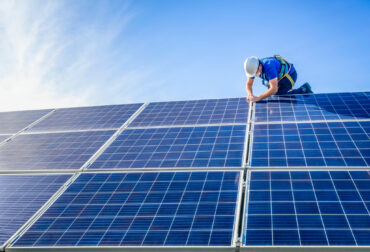 Hail is another concern for underwriters, Tasker reported. Many solar farms are being built in Alberta, and the province has seen its fair share of hailstorms. In June 2020, a $1.2- billion hailstorm hit the Calgary area, the biggest hailstorm in Canadian history.

New technology is being developed to protect green technology. For example, solar panel manufacturers are looking at installing covers that can be activated in case of bad weather. They are also looking at options to move the solar panels vertically to avoid severe damage.

“Some new technology is trying to prevent loss from hail, but it is very much an issue and something that we look at from a risk assessment standpoint,” Tasker said in an interview. “Our engineers or our systems determine how prone an area is to hailstorms; that is factored into our underwriting assessment.”

“Once again, similar to solar panels, there is a technology you can [use] called a ‘biristor,’ which sort of reflects the lightning, or grounds it, and [the strike] doesn’t cause damage to the wind turbines. But not all wind turbines are installed with this.”

If it’s older equipment, the chances are higher that the newer preventive technologies are not installed. “That’s something that we look at in a risk assessment,” Tasker said.