How much you’re lying to yourself about time management

While George Costanza may claim that his entire life is a lie, most people will tell about 200 lies a day — and many to themselves about what they’re doing and what they can actually accomplish, according to an expert speaking recently to risk professionals.

There are tools people can use to reduce those lies, take more control over their time and have more productive days, said Andrew Mellen, a professional organizer.

The lies aren’t all bald-faced ones, he observed. Only a small portion of those lies — about one-third of them — will ever exit a person’s mouth.

Many are little lies that people tell themselves and others each day. When people start to think about how many fibs they spew over a day, they start noticing and then can start making changes.

For example, telling yourself that the time you lost or wasted today is something you’ll be able to make up tomorrow is a lie. Just because you wake up at 3:30 in the morning doesn’t mean it’s 4 a.m. for everyone else in your time zone. Every day is a new day and time can’t be stopped. 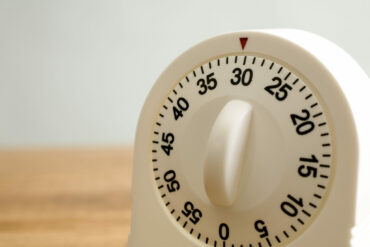 “We cannot control time; we can only control ourselves in relationship to time…You can’t manage time; you can only manage yourself,” Mellen said, noting that this was another way of how those 200 lies add up.

The lies we tell ourselves also come into play around things like clutter. We tell ourselves we’ll put something away later. That’s just deferred decision making and, often enough, we never actually put that item away. “And suddenly there’s a pile,” he said.

So how can insurance professionals manage their time? Mellen recommended people keep two tools handy at their desk: A timer and a stopwatch. He called them “your best friends when it comes to time management.”

Most people will work on a task for an extended period of time with the goal of finishing said task. But they often don’t and feel failure. When they go back to work on the task again later on, they’re already feeling beat up about it because they didn’t finish it before.

So how do you turn not finishing a task into success? Set a timer to work on it the task for, say, half an hour. After the 30 minutes are up, move on to the next task. No, you didn’t finish the first task but you did what you set out to do — work on it for half an hour.

“When the timer goes off — ding, ding, ding — you did what you said you were going to do,” Mellen said.

As for the stopwatch, time everything you do. You’ll realize that you brush your teeth, fold laundry, bathe and so on for a longer time than you think.

“All of these things that you do repeatedly, time them and find out how long they actually take rather than how long you think they take,” Mellen advised. “Because…we tend to over or underestimate how long things take. Seldom are we spot on.’”

When you have better clarity around how long a task takes, you can budget your time accordingly, he noted.