How slip-and-fall lawsuit rules could change in Ontario

Defending personal injury claims arising from slips and falls on ice could become easier for your Ontario clients this winter, based on a proposed change to the province’s deadline for serving notice about starting such lawsuits.

In Ontario, plaintiffs wanting to sue for personal injuries normally have two years after an accident to start a lawsuit. But if Bill 118 is passed into law, plaintiffs would have only 10 days to give defendants’ notice of slip-and-fall claims caused by snow and ice, Progressive Conservative MPP Norman Miller told the legislature before it recessed for the summer. 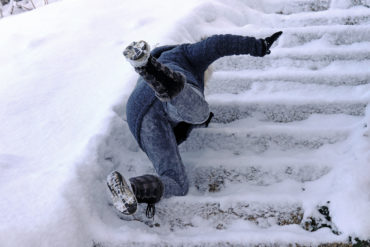 The controversial private member’s bill was referred June 6 to the Standing Committee on Regulations and Private Bills. No date of hearings has been announced. The committee is unlikely to convene before the legislature resumes sitting this fall.

Miller sponsored Bill 118, which would change the Occupiers’ Liability Act.

He told the legislature he has heard from a snow removal contractor who had difficulty getting insurance when that contractor told his insurance company he had a contract for snow removal at the local hospital.

“In many cases, as soon as there is compensation involved for clearing snow, a company’s premiums increase significantly,” said Miller, MPP for Parry Sound-Muskoka, a largely rural riding on the east side of Georgian Bay between Orillia and North Bay. “This comes from the insurance company’s fear of having to cover potential lawsuits as far as one or even two years into the future.”

In some instances, a business owner may have no idea there was an accident until they get a letter warning of an impending lawsuit, Miller added. And this could come up to one year and 11 months after the alleged accident.

“A 10-day notice to serve is simply not an adequate time frame, especially for those who have been injured and may be dealing with doctors’ appointments and medical treatments,” countered Sara Singh, deputy leader of the opposition NDP on June 6 during second reading of Bill 118.

“The business may not have any idea that something had happened until they get served a notice,” said Downey, who made his comments in the legislature two weeks before he became attorney general. “This puts an undue burden on businesses to have to defend themselves against events for which witnesses may not recall the event clearly.”

A plaintiff who fails to notify a defendant within the 10-day time frame would still be able to proceed with their lawsuit if they convince the judge there is a “reasonable excuse” and the judge finds the defendant is not prejudiced in their defence.

Putting the defendant on notice earlier lets the defendant know that they need to preserve their records and evidence, said Downey.

Private member’s bills are often not passed into law, but MPPs on the government side of the house spoke generally in favour of Bill 118.

The opposition NDP has major concerns.

Most plaintiffs who get hurt after slipping and falling on snow or ice will probably not realize until it’s too late that the 10-day window is closing fast, said Tom Rakocevic, the NDP critic for Government Services and Consumer Protection.

“How is the customer who slips and falls in the parking lot of a strip mall supposed to find out the landlord’s name and address within the time frame?” said Rakocevic. “That information is not readily, and certainly not publicly, available, as in the case of municipalities, except to a small segment of industry insiders who work in real estate.”

If passed into law with no amendments, Bill 118 would add the following section to the Occupiers’ Liability Act:

The persons listed in sub-section 2 would be an occupier, an independent contractor employed by the occupier or a landlord.