How the hail peril is changing

Once confined mostly to “hail alley” regions such as south and central Alberta, Texas and Colorado, hailstorms are now doing damage across North America in plenty of regions considered low-risk, says a new white paper from RIMS, the risk management society.

In Canada, “hail alley” is traditionally considered the area between Calgary and Red Deer, Alta. In the U.S., while Texas and Colorado remain the most vulnerable, states such as Ohio, Illinois and Minnesota are showing increasing activity in recent years.

Canada’s costliest hailstorm occurred in June 2020 in Calgary. The storm cost about $1.2 billion in insured damage, making it the fourth costliest disaster in Canadian history. Another massive hailstorm in Calgary in July of this year is estimated to have caused $247 million in insured damage, according to initial estimates from Catastrophe Indices and Quantification Inc.

“June 13 [2020] began like any other day,” said the RIMS report, sponsored by TÜV SÜD Global Risk Consultants. “Birds chirped as morning sunshine burned off the chill in the air in Calgary. But by early evening, sinister clouds blackened the sky. Small raindrops gave way to golf ball-sized hail that shattered windshields, pierced roofs, and put holes in aluminum siding.”

Saskatchewan also recently saw golf ball-sized hail. A storm on Aug. 31 and Sept. 1 brought large hail along with strong winds and rain to Regina and other parts of Saskatchewan, said Tyler McMurchy, manager of media relations with Saskatchewan Government Insurance. As of Tuesday, the public insurer already had more than 7,200 claims — 6,123 auto claims and 1,135 property claims. 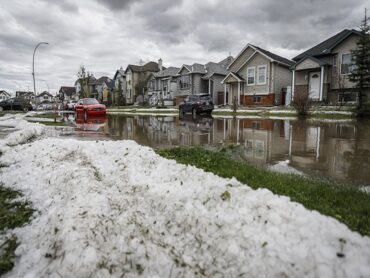 That latest weather event followed two separate hailstorms in Saskatchewan on July 22-23 and July 27-28. “We definitely saw golf ball-sized hail in the Foam Lake area on July 22,” McMurchy told Canadian Underwriter earlier. “This storm hit the Foam Lake area hardest, but we also saw claims from as far away as North Battleford.”

According to the white paper, “hail has always been a particularly vexing risk to assess and mitigate. Damage isn’t always immediately obvious, meaning water or mold problems can fester for weeks or months. In fact, one in three hail insurance claims has the wrong date of loss.”

Besides the expansion into different geographies, other trends in hailstorms include:

Hail not only damages property, but can also halt business operations for some time, the white paper noted. “In Calgary, for example, homeowners and businesses waited months for busy underwriters to assess their properties, and turned to government officials for help gaining payouts.”

To mitigate the risk of hail damage, the report recommends an armoured or rated roof. (All other roof types haven’t been rated to withstand hail damage and are best for areas with little to no hail risk.)

Armoured roofs have stone ballasts that hold the roof covering in place, then river rock is laid to cover the entire roof’s surface. As hailstones strike, the rock absorbs the energy and protects the roof covering underneath. Armoured roofs are for new buildings only and best for locations with the highest hail intensity, the paper said.

“Increasingly, experts recommend armoured or rate roofs even if a facility is not located in a high-risk area,” the report said. “Changing hail patterns make previously safe areas more vulnerable.”