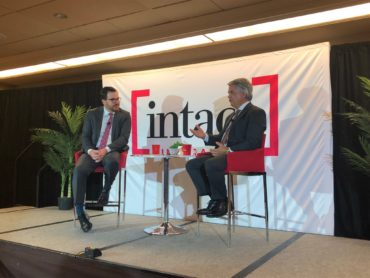 From left, Intact’s Chris Reid and Blair Feltmate, talk about ways to reduce flooding risk during a town hall discussion at the IBAO Convention in Toronto on Oct. 24.

Intact’s Centre on Climate Adaptation is “zeroing in” on flood risk mitigation, educating professionals in other industries about flood risk so that more eyes are watching out for dangers in homes across Canada.

Blair Feltmate, head of the Intact Centre on Climate Adaptation at the University of Waterloo, pointed to successful efforts in working with home inspectors recently. Feltmate spoke during a town hall discussion on climate change at the 2019 Insurance Brokers Association of Ontario (IBAO) Convention in Toronto last week.

Until about a few years ago,  home inspectors had no training on recognizing flood risks in homes, Feltmate noted. That astounded him, since inspectors are supposed to be pointing out issues with the biggest purchase a person may ever make.

“One of the things that should be at the top of [a home inspector’s list] list is, ‘Is this home going to have a flooded basement?'” Feltmate said, adding that when he originally looked through their materials for training, he thought he missed a section because he couldn’t believe this was not part of it. Now, such training exists through a course.

More training could also find its way to real estate agents. They “can bring more value to his or her client when they’re looking at homes,” and inform the client about potential issues in the dwelling,” Feltmate said. “That doesn’t mean you can’t buy the house, but it means you should be aware of it and then put the corrective measures in place before you close the deal.”

For example, information could be included on the same listing reports that show the number of bedrooms and bathrooms in the house. “Is the home flood-prepared, yes or no?” Feltmate queried. “It might be as simple as, ‘Does it have a backwater valve, yes or no?’

Mortgage brokers are another group of professionals that can help. “They should be well-informed in reference to flood risk and to be able to provide information to their clients,” Feltmate said. They can also give clients information on what they should be aware of when it comes to the potential for having their basement flood.

“So we’re trying to create small armies of people out there,” he said. “You need scalability” in order to make real impacts for flood mitigation.”

Intact will be working with the Insurance Brokers Association of Canada (IBAC) and its provincial and territorial members to develop an online course on climate change, extreme weather risk and flood risk mitigation for homes. Expected to be released in the next few weeks, it will give brokers the tools to sit with customers and have “an informed discussion about climate change, extreme weather risk, where it is going, why it’s happening and what can you – the homeowner – do to mitigate risk probability of your property being flooded,” Feltmate said.