How to increase the take-up of earthquake insurance

In addition, citizens who do not trust government authorities to safeguard them may tend to underestimate the risk of damage after a quake, thus leaving them less inclined to purchase earthquake coverage.

Is the answer to mandate earthquake insurance coverage?

Possible reasons for low take-up rates of earthquake insurance are explored in a recent paper authored by Glenn McGillivray, managing director of the Institute for Catastrophic Loss Reduction, and Mary Kelly, a professor of finance and chair of insurance at Wilfrid Laurier University. Their paper, The Earthquake Insurance Protection Gap: A Tale of Two Countries, is published in the Journal of Insurance Regulation. They wrote the paper along with Steve Bowen, head of catastrophic insight at Aon.

The paper starts with the observation that take-up rates for earthquake insurance are significantly higher in the Lower Mainland of British Columbia than in neighbouring Washington, State, even though exposure to earthquake risk in the two areas is largely the same.

More than 60% of homeowners in B.C.’s Lower Mainland purchase earthquake insurance protection for their homes and belongings, but fewer than 14% in Washington State do the same.

The key question is why?

The answer may provide a clue for how to improve the take-up rates of earthquake insurance.

One major difference between the two locales is the broader availability of government disaster assistance in Washington compared to B.C., the paper states. “While there are numerous aid and grant programs to help uninsured or under-insured people in the U.S., the B.C. government has publicly stated that it will not pay assistance for earthquake damage because of the availability of private insurance,” the authors write. “We believe this and issues centring around national culture are the two main reasons why earthquake insurance take-up rates are so low in Washington.”

Elaborating on the cultural aspect, McGillivray and Kelly write: “Because Americans tend to be individualistic and less likely to trust information provided by authorities, they are more likely to underestimate the potential risk. This has resulted in not only low take-up rates for earthquake insurance in western Washington, but also in California, where roughly only 10% of households have proper coverage.”

What can be done to increase take-up rates and lower the protection gap for quake insurance?

The article suggests a number of potential solutions, including mortgage lenders requiring (or governments mandating) the purchase of insurance.

Changes in product design could also motivate more homeowners to purchase earthquake insurance. This might include bundling all potential disasters into a basic policy, or changing the typical one-year policy duration into a multiple-year term. Another possibility is to provide “insurance vouchers” to high-risk, low-income households.

Multi-year policies would benefit both the insured (who would have protection for the life of the policy) and the insurer (which would have both risk and premium set for a few years), McGillivray told Canadian Underwriter Wednesday. “It is felt that this would lower costs for the insurer, who could offer a lower premium. It would also allow the consumer to benefit from stability with regard to their cost of insurance.”

Kelly added that a multi-year policy also encourages investments in mitigation. “When a consumer can see the five-year impact of the reduction in premium if they undertake mitigation, then they are more likely to do so.”

Insurance vouchers are designed to help low-income households deal with the high cost of risk-based premiums for perils such as flood and earthquake. They are tied to income levels, whereas subsidized rates are typically tied to risk levels, Kelly said Wednesday. “One of the ideas here is to assist people in paying the premium and not reducing the premium so that it is no longer risk-based,” McGillivray said. 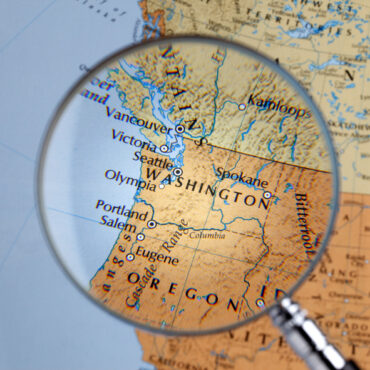 “When I think about it,” Kelly said, “I think about how subsidized daycare works in Ontario, and a similar model would work (I think) for vouchers.”

Government-run insurers like the U.S. National Flood Insurance Program have gotten themselves in trouble in the past by not charging property pricing for risk, McGillivray observed. In contrast, insurers would (and could) not reduce premiums, or else they would get into solvency issues. “The answer could be vouchers,” McGillivray said.

He noted that vouchers could result in both a reduced reliance on disaster assistance and a quicker recovery after a loss event.

If U.S. state governments required earthquake insurance, would Washington see take-up rates near that of B.C.?

If quake insurance were mandatory, take-up rates would likely exceed those of B.C., McGillivray said.

In this scenario, however, the potential exists of an unscrupulous homeowner purchasing the insurance, providing proof to authorities, and then cancelling the policy.

“Barring this, requiring earthquake cover could work, though we feel it would be politically unpalatable to many,” McGillivray said.

Authorities would have to ensure enough companies offer the coverage. Options might include a negative option, meaning that a homeowner automatically gets earthquake coverage unless they opt out.

It’s also worth noting that when U.S. government mortgage loan corporations tried to make quake coverage required for mortgages in California, the state blocked it, Kelly added. Legislation states that the California Earthquake Authority will cease writing new quake insurance policies if either government association (Freddie Mac and Fannie Mae) requires this type of insurance. “So, I can’t see it ever being passed,” Kelly said.

McGillivray agrees the issue is a double-edged sword. If quake insurance were to be mandated in B.C., the protection gap would be reduced (though not eliminated because quake insurance still have large deductibles; plus, not all properties would have enough damage to trigger the policy). On the other hand, there would be higher earthquake exposure for insurers, who would have to manage their accumulations and purchase adequate Cat reinsurance.

“This would all have to be carefully managed, as the industry has only so much capital to pay for a major West Coast earthquake,” McGillivray said.

Kelly noted that a typical deductible is 10% of the property value. “In theory, insurers should have sufficient reinsurance, but I too would anticipate that some of the smaller players might significantly limit their exposure in response.”