Hundreds of collisions in aftermath of Toronto snow storm

A winter storm that dumped nearly a foot of snow on Toronto and surrounding areas over a 24-hour period has also caused hundreds of collisions.

From a claims perspective, there has not been a “significant increase” in claim activity, one large adjusting firm said. 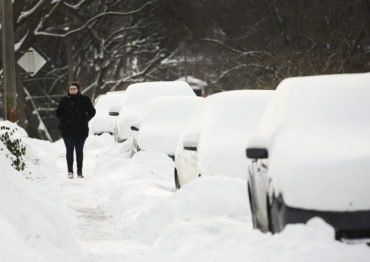 A women walks by snowed-in cars after Toronto and most of southern Ontario got hit by a storm in Toronto on Tuesday, January 29, 2019. THE CANADIAN PRESS/Nathan Denette

“With that being said, within our ClaimsALERT Contact Centre, we have experienced a considerable spike in call volume as a result of previous weather conditions from Saturday, Jan 19th to Monday, Jan. 21, 2019,” said Brent Hackett, vice president of operations for Ontario with Crawford & Company (Canada) Inc. “There was about a 67% increase in call volume between this period compared to the rest of January. In terms of the afternoon snowfall of January 28, 2019, we experienced a marginal increase in call volume, which seems to have tapered off.”

Another adjusting firm, ClaimsPro, has reported an influx of auto losses, mainly auto physical damage claims. That said, “we do not anticipate significant exposure like the water losses from the August storm,” noted Kumar Sivakumaran, ClaimsPro’s national vice president of operations. “Given there was no rain followed by snow, this reduced the exposure on property claims,” Sivakumaran added when asked it if looks like the storm will meet the cat threshold of at least $25 million in insured property damage.

The storm swept through the Greater Toronto Area (GTA) over the past few days, with Environment and Climate Change Canada reporting 26.4 centimetres of snow Monday, and another 7 cm Tuesday.

Over a 24-hour period, there were 300 crashes in the GTA, Sgt. Kerry Schmidt of the Ontario Provincial Police reported early Tuesday morning. Data for 2018 Q2 from Mitchell International reported that an average gross collision appraisal value uploaded through Mitchell Canadian systems was $3,917.

One of the crashes saw a vehicle lose control in the snow, and then hit a transport truck, which rolled into a ditch.

Sivakumaran said the claims adjuster has seen “single vehicle wrecks” in which a driver comes around the bend and doesn’t realize how slippery it is. “There were a number of collisions reported, but nothing too significant from this event.”

In one case, a vehicle collided with a home, causing serious injuries to one person and damage to the front of the house, according to media reports. A separate accident involved three vehicles in a head-on collision in which one person sustained serious injuries and two others sustained minor ones.

School buses were cancelled and some colleges and universities closed early. The Toronto Transit Commission saw no service between certain stations.

Toronto Pearson International Airport said Monday airlines have delayed or cancelled a “significant” number of flights. By Tuesday, airport functions were operating normally, but plane departure rates had been reduced to maintain safety.

Editor’s Note:  This is a developing story and more information will be added as it becomes available.