Michael roared toward the Florida panhandle as a Category 4 hurricane Wednesday, with long-range forecasts predicting its remnants could dump heavy rains on Nova Scotia if it passes south of the province as expected.

The brutish storm has grown swiftly into what could be one of the panhandle’s worst hurricanes in memory, with destructive winds, up to 30 centimetres of rain and a storm surge of up to four metres. 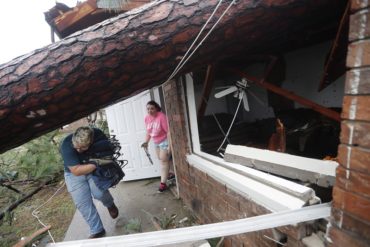 According to Environment Canada, the potent weather system is expected to weaken into a tropical storm after making landfall in Florida and is forecast to track south of Nova Scotia on Friday.

The forecaster’s long-range models are calling for the possibility of heavy rainfall in parts of Nova Scotia, depending on how close the system comes to the province.

At midday, the hurricane was closing in on the Florida panhandle with potentially catastrophic winds of 233 kilometres per hour, making it the most powerful storm on record to menace the stretch of fishing towns, military bases and spring-break beaches.

“I really fear for what things are going to look like there tomorrow at this time,” Colorado State University hurricane expert Phil Klotzbach said in an email.

The storm quickly sprang from a weekend tropical depression, reaching Category 4 early Wednesday as it drew energy from the Gulf of Mexico’s warm waters. That was up from a Category 2 Tuesday afternoon.

“The time to evacuate has come and gone … SEEK REFUGE IMMEDIATELY,” Florida Gov. Rick Scott tweeted, while the sheriff in Panama City’s Bay County issued a shelter-in-place order before dawn.

Rainfall could reach up to 30 centimetres and the storm surge could swell to four metres.

The storm appeared to be so powerful – with a central pressure dropping to 933 millibars – that it is expected to remain a hurricane as it moves over Georgia early Thursday. Forecasters said it will unleash damaging winds and rain all the way into the Carolinas, which are still recovering from hurricane Florence’s epic flooding.

“The historical record, going back to 1851, finds no Category 4 hurricane ever hitting the Florida panhandle.”

Several hours ahead of landfall, seawater was already lapping over the docks at Massalina Bayou near downtown Panama City, and knee-deep water was rising against buildings in St. Marks, which sits on an inlet south of Tallahassee.

Huge waves pounded the white sands of Panama City Beach, shooting frothy water all the way to the base of wooden stairs that lead to the beach.

More than 5,000 evacuees sought shelter in the capital city, which is about 40 kilometres from the coast, but is covered by live oak and pine trees that can fall and cause power outages even in smaller storms.

Only a skeleton staff remained at Tyndall Air Force Base, situated on a peninsula just south of Panama City.

Meteorologists watched in real time as a new government satellite showed the hurricane’s eye tightening, surrounded by lightning that lit it up “like a Christmas tree.”

Marshall Shepherd, a former president of the American Meteorological Society, called it a “life-altering event,” writing on Facebook that he watched the storm’s growth on satellite images with a pit in his stomach.

— With files from The Associated Press