Hurricane warnings: Is it crying wolf when storms aren’t as bad as expected?

While Hurricane Laura’s insured damage estimates in the United States range anywhere between $4 billion to $12 billion, the post-tropical storm predicted for Atlantic Canada did not quite reach the level of intensity initially forecast for the Maritimes last Thursday.

Meanwhile, debate in the United States is raging over whether the National Hurricane Center is guilty of crying wolf when it warned Thursday of “unsurvivable” storm surges in Texas and Louisiana — a prediction that didn’t quite play out as expected.

In Canada, heavy rains and wind did indeed follow the hurricane’s path into Atlantic Canada, but the impact of the storm did not seem to be as severe as anticipated, as reported over the weekend by The Weather Network.

“The remnants of Hurricane Laura won’t impact the East Coast directly, but their abundant moisture is fuelling downpours there, particularly in Newfoundland Sunday through Monday,” The Weather Network reported. “As well, strong winds may reach damaging levels, and have already brought elevated storm surge to parts of Nova Scotia, with Newfoundland next.” 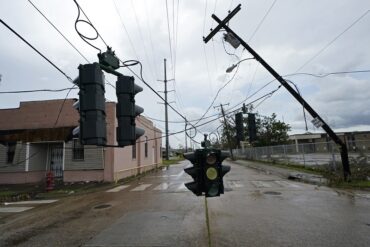 The rain and sustained 70 km/h to 80 km/h winds (with some gusts reaching 100 km/h) were forecast to be felt most acutely in Newfoundland and Labrador over the weekend, particularly the Avalon and Burin peninsulas, where between 30 mm and 50 mm of rain was projected over the course of the entire event, ending on Monday. The heaviest rainfalls happened Sunday morning.

In some ways, the storm fell within the predictions published by the Canadian Hurricane Centre Thursday.

But in the United States, Cat modelers noted that Hurricane Laura’s storm surge — estimated to be 15 to 20 feet in some areas — didn’t quite measure up to the National Hurricane Center’s advanced billing.

Cat modeller AIR Worldwide, for example, observed the storm surge did not reach the highest predicted levels. “Laura’s storm surge was not as severe as expected, as the storm tracked a bit east of the Calcasieu Ship Channel, a waterway that connects the town of Lake Charles with the Gulf of Mexico, and pushed less water forward,” AIR reported. “The highest storm surge recorded thus far was around 15 feet above NAVD88 (around 17 feet above MLG), measured at a USACE river gauge on the Mermentau River at Grand Chenier (70900) in Cameron Parish County, Louisiana.”

AIR Worldwide predicted insured losses from the hurricane would be between $4 billion and $8 billion (all figures in U.S. currency).

“Although comparisons between Laura and Hurricane Rita (2005) have been made, they differ in two important ways: Rita was a larger storm and hit a more populous area than Laura did,” Dr. Cagdas Kafali, senior vice president of research at AIR Worldwide, said in a public statement announcing the damage estimates. “Rita made landfall west of where Laura did, impacting population centers of Texas; Laura made landfall well east of Houston and west of New Orleans, keeping losses lower.”

Karen Clark and Company’s industry loss estimate of $9 billion also noted that the storm surge did not reach 20-foot levels, but created significant damage nonetheless. “Peak storm surge heights did not reach the worst-case predictions of the National Hurricane Center (NHC), and flooding damage was less severe than projected,” the Cat modeller noted. “Even though the worst-case scenario storm surge did not materialize, significant flooding occurred in coastal areas. Due to extensive debris accumulation, roads have become impassable, delaying cleanup efforts in the most impacted areas.”

In published interviews, Jamie Rhome, the team lead for the National Hurricane Centre’s storm surge unit, said Hurricane Laura’s storm surges did in fact justify the severe warnings issued in advance by the forecaster. One reason why the surge did not reach 20 feet, he told nola.com, was because “the center of Laura’s 40-mile-wide eye went ashore about 40 miles east of the mouth of the Sabine River, which was the landfall point on which the surge forecast was based,” as reported by nola.com’s Mark Schleifstein.

Also, Rhome told Reuters, some reports that the storm surge did not reach the forecasted peak range of 15-20 feet were “based off a single observation station in Cameron Parish that didn’t come close to measuring the peak storm surge, which occurred at 10 or 15 miles (16 to 24 kilometers) east of there.”