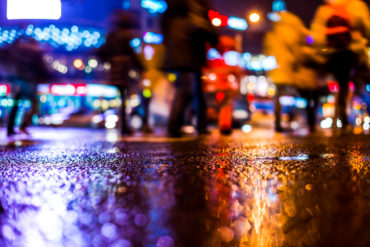 “Alarmingly, a disproportionate number of pedestrian-related crashes and injuries happen in just four months of the year – 43 per cent of all crashes that injure pedestrians happen between October and January as visibility and conditions get worse,” ICBC said in a press release.

ICBC noted in the release that pedestrians are the “most vulnerable road user” to get injured when a crash occurs. “These preventable crashes are also contributing to the rising number of injury claims in our province – the largest single cost pressure on B.C. insurance rates,” the insurer stated.

Dark and rainy conditions can seriously impact visibility. ICBC’s new radio and online advertising builds on this by reminding drivers: “you see pedestrians when you really look for them. Keep your eyes on the road: take a break from your phone, be extra alert at intersections and be ready to yield the right-of-way to pedestrians.”

The most important tip for pedestrians is to “take extra care to help drivers see you,” ICBC recommended, by staying focused on the road and making eye contact. ICBC and community policing volunteers will be handing out reflectors and safety tips in high pedestrian traffic areas across the province to help pedestrians stay visible.

In addition to the month-long campaign, ICBC is helping making roads safer for vulnerable road users through its road improvement program. Last year, ICBC invested in more than 160 pedestrian and cyclist-related projects in B.C., including crosswalks, sidewalks, countdown timers and pedestrian-activated flashing crosswalks.

As three-quarters of pedestrian crashes occur at intersections, the intersection safety camera program is one of the ways ICBC is working to improve road safety for everyone sharing the road. A partnership between ICBC, government and police for almost 20 years, there are 140 cameras set up at the highest-risk intersections in 26 communities in B.C. to change driver behaviour and reduce the number of crashes at intersections. ICBC reported that it is working with its partners to extend the activation to be 24/7.

Chief Constable Neil Dubord, chair of the B.C. Association of Chiefs of Police’s Traffic Safety Committee, said in the release that “distracted driving and failing to yield the right-of-way remain the top contributing factors for drivers in crashes involving pedestrians.

More News
Related
Making ICBC a co-op one option for B.C., competition must be part of any option selected: taxpayers federation
How ICBC can cut auto injury claims costs by more than $20 million
ICBC to remodel system to reward low-risk drivers
What private insurers think of changes to B.C. auto insurance model