A British Columbia court recently ruled against the province’s government-run auto insurer when it found that a man who suffered a spinal injury while moving his all-terrain vehicle from his pickup truck is entitled to accident benefits. 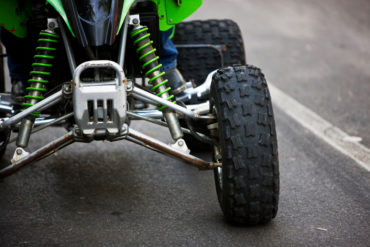 Section 96(b)(i) of B.C.’s Insurance (Vehicle) Act Regulation (also known as Regulation 447/83) stipulates that ICBC is not liable to pay benefits “in respect of the injury or death of a person …. who, at the time of the accident, is … an occupant of or is struck by a vehicle that could not be licensed under the Motor Vehicle Act or Commercial Transport Act or that is of such design that if owned or operated in the Province could not be licensed under one of those Acts.”

On July 24, 2005, Sheldon Prosofsky loaded his Polaris ATV into the box of the Dodge Ram pickup truck insured by ICBC. That ATV cannot be licensed under the Motor Vehicle Act.

“It was his intention to travel to the home of a friend, unload the ATV and use it recreationally,” states an agreed statement of facts submitted to the Supreme Court of B.C.

When Prosofsky arrived at his friend’s home, he set up a ramp on his pickup truck, “climbed into the box of the Pickup and mounted the seat of the ATV,” states the agreed statement of facts. Prosofsky “did not start the engine of the ATV, but instead, placed it into neutral and using the brake, began to ease the ATV down the Ramp toward the surface of the ground.”

However, after the rear wheels of the ATV made contact with the ramp, “an underinflated tire became caught in the Ramp, causing the front-end of the ATV to rise up, where after the plaintiff and the ATV fell off the Ramp on to the ground.”

Court records indicate that Prosofsky injured his thoracic spine and suffered “a burst fracture at L1 in his lumbar spine.” He had surgery but may require further surgery.

Prosofksy opened a claim with ICBC Aug. 8, 2005 and made an application for accident benefits. Five years later, ICBC told him the claim would no longer be honoured because his ATV was excluded from coverage. On March 30, 2011, Prosofksy filed a lawsuit with the Supreme Court of B.C. in Kamloops.

Prosofksy argued that “he was injured in an accident that arose out of the use and operation of his pick-up truck,” while ICBC contended that it did not matter where the ATV “was being used at the time of the accident.”

In a decision released Aug. 29, 2016, Madam Justice Hope Hyslop ruled that Prosofsky was not “operating” his ATV and was not an “occupant” of it.

Hyslop cited a Supreme Court of Canada decision against ICBC released in 1995.

In 1991, Vancouver resident Briton Amos was driving his personal vehicle through East Palo Alto, Calif. when six men surrounded it.

One of those six broke the glass on the driver’s side window of Amos’ van. Amos was shot but was able to drive away and get medical help.

The bullet struck Amos’ spinal cord at the T8-T9 level, wrote Mr. Justice Jack Major, then of the Supreme Court of Canada, in its unanimous ruling in favour of Amos.

In 1993, a B.C. Supreme Court ruled in favour of ICBC, with the trial judge unable to find that Amos’s injuries “resulted in any way from an accident, ‘which the common judgment in ordinary language would attribute to the utilization of an automobile.'”

Amos was “an innocent victim of an act of wanton criminal violence” and there was no evidence that Amos’s vehicle “in any way contributed to or aggravated his injuries,” the lower court ruled. That ruling was upheld on appeal but overturned by Canada’s highest court.

In 1995, the Supreme Court of Canada quoted from a 1975 ruling from the Michigan Court of Appeals, which held that “while the automobile need not be the proximate cause of the injury, there still must be a causal connection between the injury sustained and the ownership, maintenance or use of the automobile and which causal connection is more than incidental, fortuitous or but for.”

Although Amos was injured by a gunshot wound, “a motor vehicle need not be the instrument of the injury to satisfy the causal connection requirement,” Justice Major wrote in 1995, adding that injuries “which do not arise from the negligent use of a motor vehicle” may still be covered by B.C. accident benefits.

“The words in s. 79(1) chosen by the legislature are broad and should be interpreted to give meaning to the legislative intention that extends coverage where some connection is found between ownership, use or operation of a vehicle and the injuries sustained as a result of an accident,” Justice Major wrote.

In Amos, “it is important that the shooting was not random but a shooting that arose out of the appellant’s ownership, use and operation of his vehicle,” Justice Major stated.

There is a two-part test in interpreting coverage, Justice Major explained.